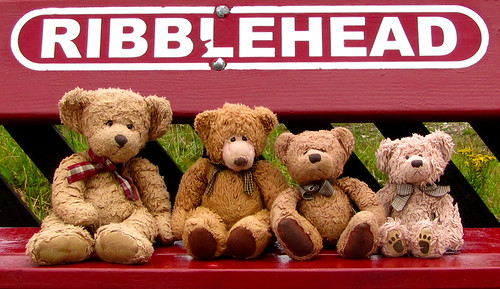 Ribblehead is somewhat remote boasting only a railway station a few houses and The Station Inn. The teddybears may have a bit of a wait before they can start their picnic.
Located at the head of the River Ribble, the viaduct is firmly located in the Yorkshire Dales National Park and the hearts of many railway enthusiasts. 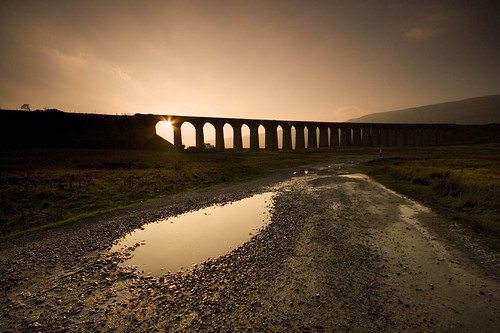 The Ribblehead Viaduct at sunset and behind it to the right Whernside one of the three peaks and the highest point in Yorkshire. It looks like it has been drizzling for a shortwhile but the puddles should dry up by September before it starts to rain.
A light dusting of snow can be expected in May and June but for real snow you need to visit in February or any month with an R in the name. 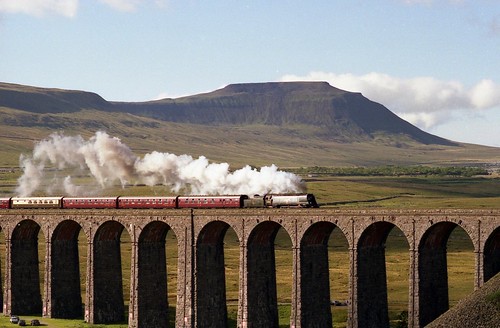 ‘”City of Wells” 34092, one of Oliver Bulleid’s Light Pacifics, crossing Ribblehead Viaduct in May 1987.
This steam locomotive is currently being overhauled by Keighley and Worth Valley Railway.
Ingleborough Hill 723 m (2373 ft) high rises in the background.’ 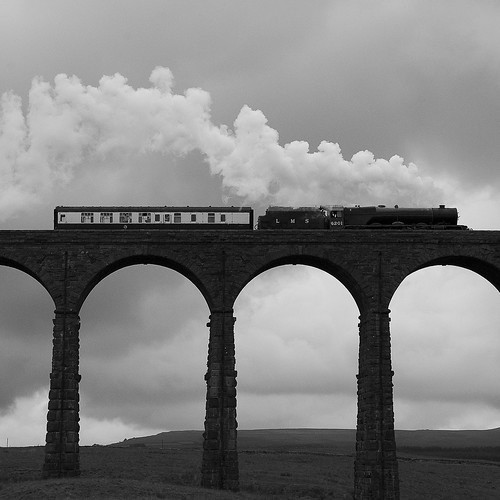 There are still steam train excursions over the Settle – Carlisle section of the railway. ‘The 72 mile route from Settle to Carlisle takes you on a journey through the magnificent Yorkshire Dales, over the 24 arches of the Ribblehead Viaduct before plunging in to the longest tunnel on the line at Blea Moor. Emerging onto the side of Dentdale, the line leaves the Dales at Garsdale and makes it way through the gentle, lush rolling hills of the Eden Valley, with rural villages and market towns before arriving at the great border city of Carlisle.’ 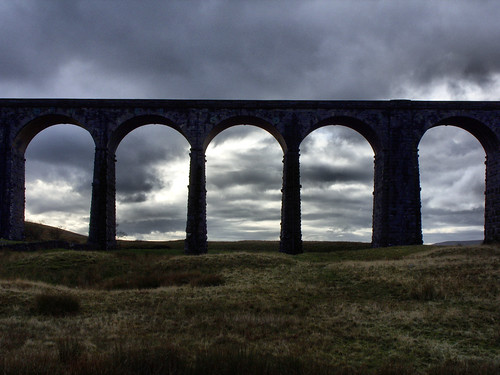 One of Yorkshire’s most distinctive landmarks and proud to be included in the Seven Man Made Wonders of |Yorkshire.

This entry was posted in Seven Wonders of Yorkshire, Transport and Travel. Bookmark the permalink.