Emley Moor transmitting station near Huddersfield is still the UK’s tallest structure in Yorkshire at 1083 feet 330.5 metres for those who have been metricated (Ouch)! It beats Bilsdale mast Helmsley by 54 feet and is 4th in our overall UK communication masts.

Drax power station near Selby is a massive 850 feet, not bad for a chimney.
The Shard is (only) 1016 feet tall but is the highest occupied commercial building in Europe. The Shard has 96 stories but Emley Moor broadcasts this many more stories every day.
Canary Wharf and One Canada Square is now dwarfed into third place at a meager 770 feet. 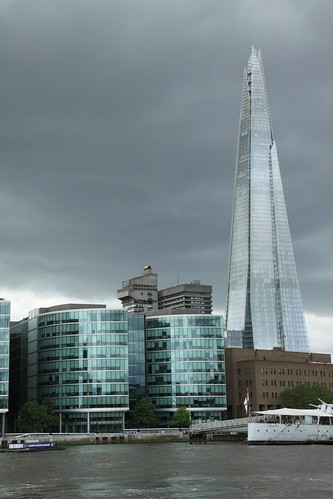 The original 443 ft (135-metre) lattice tower was erected in 1956 to provide television broadcasts for Granada and ABC TV to the Yorkshire area. Most of Yorkshire is still covered by Emley Moor transmissions of radio and TV.

On 19 March 1969 a combination of strong winds, vibrations and the weight of ice that had formed around the top of the mast and on the guy wires brought the structure down.

It was replaced by a new structure consists of a curved pillar 903 feet tall, constructed of reinforced concrete topped by a 180 feet of steel lattice mast which carries the antennae.

See the web site the Fall and Rise of Emley Moor for more pictures, memories and information. 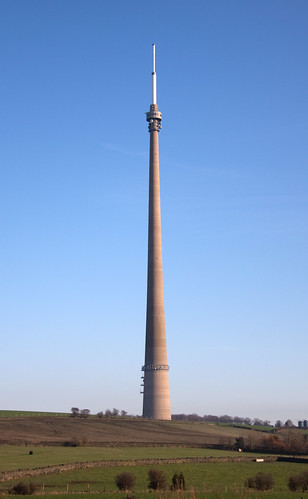 Photo credits
Shard London Bridge by Dave Catchpole CC BY 2.0 ‘Shard London Bridge or The Shard (formerly known as London Bridge Tower or the Shard of Glass) is a skyscraper in Southwark, London. Standing almost 310 metres (1,020 ft) tall, it is currently the tallest building in the EU. It is also the second-tallest free-standing structure in the UK, after the 330-metre (1,083 ft) concrete tower at the Emley Moor transmitting station.
The Shard replaced Southwark Towers, a 24-storey office building constructed on the site in 1975. Renzo Piano, the Shard’s architect, worked with the architectural firm Broadway Malyan during the planning stage. The tower has 72 habitable floors, with a viewing gallery and open-air observation deck – the UK’s highest – on the 72nd floor. It was designed with an irregular pyramidal shape from the base to the top, and is clad entirely in glass. Shard London Bridge’s structure was completed in April 2012, and it will open to the public on 5 July 2012.’

Emley Moor Mast by ahisgett CC BY 2.0 ‘The TV mast is the tallest freestanding structure in the United Kingdom, but it isn’t as tall as the mast that it replaced in 1969.
I remember when that mast collapsed on the 19th March 1969, because of ice and high wind. We rode up to Emley Moor on our bikes the day after to see where the falling cables had cut right through the local church and felled several large trees.’