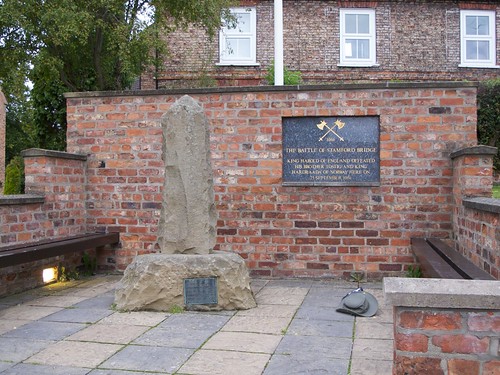 Stamford Bridge September 1066
King Harald’s army had just suffered heavy losses at Gate Fulford but were reinforced by Tostig’s troops and the Norwegian army were in celebratory mood. With fast marching and impulsive action King Harold marched part of his army from Tadcaster to Stamford bridge and caught his foes unprepared.
The memorial in the village reads ‘The Battle of Stamford Bridge – King Harold of England defeated his brother Tostig and King (Harald Sigurdsson) Hardraada of Norway here on 25th September 1066′.

The road from York through domesday village Gate Helmsley towards Stamford Bridge is the Roman road the English army marched down to the battlefield.
The village of Stamford bridge has been created since the battle and is now a tourist spot. The Swordsman inn celebrates an incident in the battle when one Viking is thought to have held the bridge over the river Derwent.

Battle of the Standard Northallerton August 1138

With the Scots army under King David marching down through Darlington the Archbishop of York, Thurstan issued orders for all loyal men to to march north through Thirsk to meet them on the battlefield at Northallerton. An army of over 10,000 men was raised and they formed up on Standard Hill.
‘Standard’ is named for the cross -beam that hung the individual standards of the 4 northern saints; John of Beverley, Peter of York, Wilfred of Ripon and Cuthbert of Durham.
The Anglo Saxon Chronicles of the time reported ‘In 1138 came David, King of Scotland, with an immense army to this land. He was ambitious to win this land but against him came William, Earl of Albemarle, to whom the king had committed York, and other trustworthy follower who fought against them, and routed the king at the Standard, and slew very many of his host.’ King David escaped in a fighting retreat to Carlisle.

The battlefield is easy to find three miles north of from Northallerton on the A167 there is a ridge running north to south with a monument that roughly marks the the English lines. 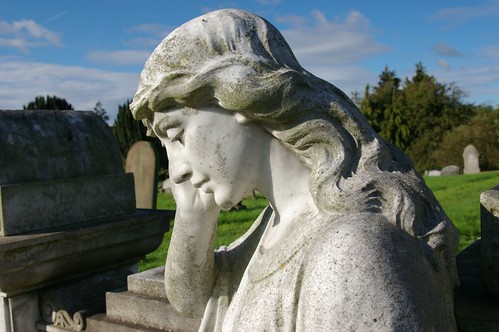 The Battle of Boroughbridge 1322
This battle took place during the Scots war of independence. The earlier battles of Myton and the subsequently Byland were against the Scots invading armies. The battle of Boroughbridge though was between troops loyal to king Edward II and the rebellious Thomas Duke of Lancaster.
Lancaster had to retreat from Burton to his castle at Pontefract and planned to return to Northumberland across the river Ure at Boroughbridge. The King had out-thought him and the northern bank of the river was manned by loyal troops. Lancaster was captured and later beheaded in Pontefract. His followers Clifford and Badelsmere were tried for treason and hanged. 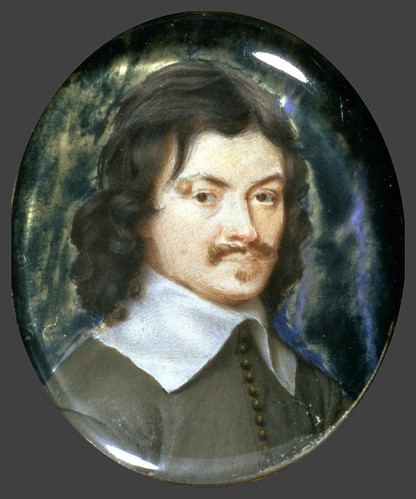 Battle of Wakefield 1460
The Duke of York left London at the beginning of December 1460 and marched steadily up the great north road to confront the Lancastrian army in Yorkshire. He probably aimed to use his castle at Sandal arriving around Christmas day. With York’s morale low the Lancastrians appeared from Wakefield on 30th December 1460. York was outnumbered in the battle and had the lower ground and by the end of the day he was dead.
The Lancastrian army returned to York where they displayed the heads of The Duke of York, Rutland and Salisbury as they awaited the arrival of Queen Margaret from Scotland.

1642 Sir William Fairfax took the side of Parliament against King Charles I and signed the Yorkshire petition of 12 May, beseeching the King to trust to Parliament and dismiss his guards.
During the ensuing Civil War, Sir William Fairfax raised a regiment among his tenantry and commanded an infantry regiment under the Earl of Essex at the Battle of Edgehill in October 1642
He then joined forces with his uncle, 2nd Baron Fairfax and his cousin, Sir Thomas at Selby. In 1643 he took part in the capture of Leeds (23 January) and of Wakefield (21 May). At the siege of Wakefield, the Fairfaxes with fifteen hundred men stormed a town held by twice that number. 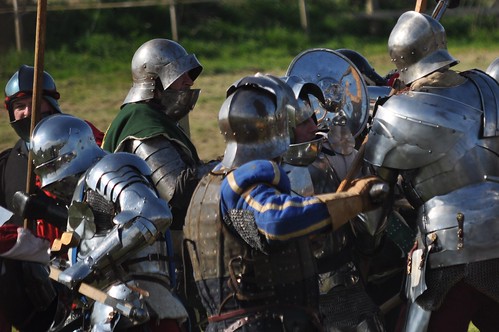 Towton march 1461
Towton was the “largest and bloodiest battle ever fought on English soil”. Records claim more than 100,000 soldiers from the Houses of York and Lancaster fought but this number is believed to be double the actual fighting force. A newsletter circulated a week after the battle reported that 28,000 died on the battlefield.
The Lancastrians deployed on the northern ridge which is now marked by ‘Lord Dacre’s Cross’ memorial. Yorkists formed up at Saxton and in the battle were struggling until Norfolk’s men arrived to bolster the flanks and drive Lancastrian into retreat.
The battle brought about a change as Edward IV displaced Henry VI as King of England, driving the head of the Lancastrians and his key supporters out of the country.

Adwalton Moor June 1643
1643 was the year of great royalist advances across England. The battle of Adwalton Moor was a decisive engagement. After Marston Moor this was the second most important action fought in the North during the Civil War and much of the North came into the hands of the King.
‘In the early stages of the first Civil War, the Parliamentary cause in the North was upheld by the Fairfax family, the Royalist party by the Earl of Newcastle. To break the power of the Fairfaxes, which was concentrated on the cloth towns of West Yorkshire, the Earl of Newcastle marched on Bradford in June 1643 with 10,000 men. To defend the town, which could not have resisted a siege, the Fairfaxes advanced from Bradford with 3,000 – 4,000 men and gave battle on Adwalton Moor.’ more on English heritage
Much of the battlefield has been industrialised in the 18th and 19th centuries but Drighlington library has information boards and a route for a battlefield walk. 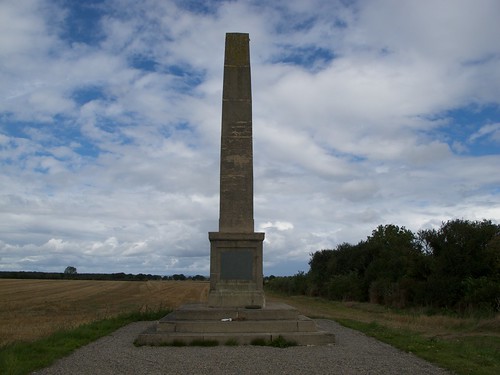 Marston moor 1644
Oliver Cromwell made his name as a commander by routing Prince Rupert showing how a well equipped, trained and committed parliamentarian army could win the war. He was aided by the allied armies including Sir Thomas Fairfax.
The fall of Selby in April 1644 had been a major blow to the Royalist cause forcing a withdraw to defend York which now came under threat from Lord Fairfax and the Yorkshire Parliamentarians. As they withdrew towards York, the Earl of Leven joined forces with Lord Fairfax at Wetherby.
For more see British civil wars
You can walk the battlefield starting at the monument that is between Long Marston and Tockwith. These two villages mark the East and West extremities of the battle.

This entry was posted in Seven Wonders of Yorkshire, Yorkshire History and Heritage. Bookmark the permalink.

One Response to Historic Battles on Yorkshire Battlegrounds