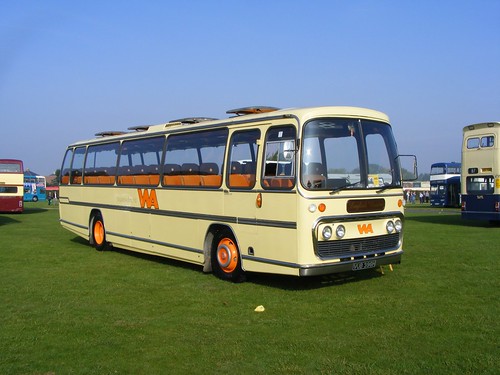 Do you collect ‘Nobbies’, in the red livery of Norbert Dentressangle or ‘Stobbies’, in the green livery of Eddie Stobart on long road Journeys? It can keep me and children amused for miles and miles spotting and counting the lorries. What a shame that we can’t also collect ‘Wallies’ in the distinctive yellow coaching livery. Wallace Arnold has succumbed to corporate rebranding since 2007 by the new owners Shearings Holidays.

Founded in 1912 by Wallace Cunningham and Arnold Crowe the holiday coach tour business developed until it merged in 1926 with an established charabanc operator R Barr (Leeds) Ltd. From 1930 Wallace Arnold ran daily coach services to Blackpool and even started its European tours to Germany. Such coach travel was still expensive and somewhat exclusive until it opened up after the Second World War. By 1948 Wallace Arnold had offices in 10 northern towns and must have run millions of people on mystery tours or trips to the seaside.
In 1959 the company expanded by buying the Kippax & District bus company and brought in double decker buses. By the end of the 1970’s coach holidays were loosing customers to cheap air package holidays and Wallace Arnold tried various diversifications including a venture with P&O called Coach & Cruise. With the opening of the Channel Tunnel in 1994 many more European tours were put into the brochures and good quality coaches were operated.
So bearing this and lots of happy memories in mind perhaps it would not be appropriate to be calling out ‘there is a Wally’.

Dates for your Diary
August 2nd 2015 is the Trans-Pennine Run for pre December 1989 buses and coaches from Birch Services, M62, Middleton to The Stray, Harrogate (no part of the route is on motorway).

You can see more replica models of Wallace Arnold coaches by clicking on the photograph above.