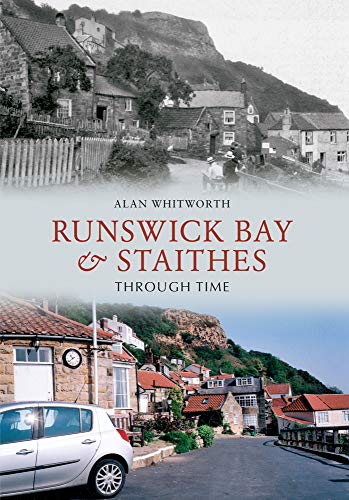 Time and tide wait for no man and clinging to the cliffs on the East coast can also be a precarious pastime.  This book traces the activity around Runswick Bay. see also  The Natural History of Runswick Bay.

In 1682 the whole cliff face at Runswick Bay collapsed into the sea taking all the village with it save for one cottage. A disaster fund helped build a new village that we know today as a picturesque fishing village and holiday spot still clinging to the cliff. Another landslide in 1858 destroyed a small iron-smelting works and the run off from the moors and the exposure to the sea regularly test the coastal defenses.

Runswick Bay has been inhabited since before Roman times as burial mounds found on the moors behind the village attest. How many Yorkshire ancestors landed in Runswick Bay with the Danes and Vikings en-route to York and places West?  In the 17th and 18th centuries we know smuggling was rife but it is also clear the village revolved around the fishing industry from whaling to herring.
The life boat sadly moved to Staithes in 1978 but a rescue service still runs. There was also one occasion in 1901 when the old lifeboat had been manned entirely by women when their men in the ‘Cobles’ (local boats) were caught in a freak squall. (Perhaps I should have said womanned not manned).  The old thatched Coastguard’s Cottage still stands at the edge of the village with the life-boat house and boat park virtually on the beach.

And Blow father home to mother.”

Even at the beginning of the 20th century witches were believed to possess the ‘Evil Eye’ and such superstitions were wide spread. If you don’t believe this why not visit and hear from the remaining locals over a pint ot two in the local hostelries. There is a community web site with links to more information and accommodation.