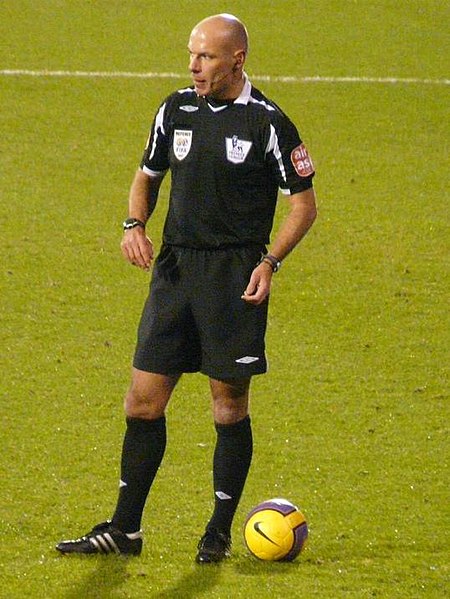 Known for his bald head and refereeing the World Cup final, Howard was born and brought up in Rotherham. His middle name is Melton and you don’t get many of those to the pound.

In 1996, he was appointed as a Football League and two years later the Premier League as an assistant referee
In 1998 he was promoted to the Football Conference as a referee.
2003 saw him as a Premier League referee and was appointed as a FIFA official in 2005.
An FA Cup Final, a UEFA Champions League Final and a FIFA World Cup Final have all been refereed by Howard Webb

Referees face unfair and biased criticism all the time. Howard gets less than most by dint of his integrity and skill (not because there are currently no Premiership teams from Yorkshire).

‘Webb bore a one-week demotion from officiating in the Premier League down to the Football League Championship in April 2009, a punishment sporadically imposed on referees who make high-profile contentious errors. Webb had been earlier been appointed to referee the year’s FA Cup Final, arguably the highest domestic honour for an official, when he awarded Manchester United a debatable penalty kick while they trailed 2-0 to Tottenham Hotspur. The penalty was converted and United went on to win the match 5-2. Webb later admitted he had made “a mistake” but had made the decision “honestly”.’*

This year Howard was pilloried by some media for awarding a penalty to Manchester United in the FA cup against Liverpool when Dimitar Berbatov gulled him. Later in the same match he sent off Steven Gerrard for a dangerous challenge on Michael Carrick further inflaming Liverpool supporters.

What footballer doesn’t make numerous mistakes. It is time referees were treated with far more respect.

Last year Howard Webb received the MBE for service to sport. Howard Webb has been a serving police officer through most of his refereeing career.

This entry was posted in Our Yorkshire, Yorkshire Folk, Yorkshire Sport and Pastimes. Bookmark the permalink.