Regeneration has not worked particularly well for Goldthorpe in the South Yorkshire coal mining area.
Shops are boarded up and the market of up to 64 stalls the means of buying cheap food and clothing has had regeneration plans cut. 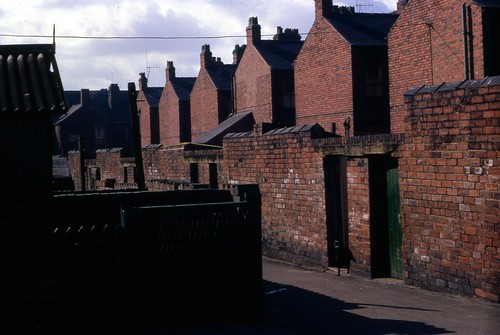 A village recorded in the doomsday book, Goldthorpe was a medieval farming area in the Dearn Valley. In 1988 it got a railway station but lost the coal mine that had helped the village to grow to 7000 people.

The Barnsley council ‘Goldthorpe Masterplan’ was approved in January 2009 to address:
• Poor quality housing
• New housing that is becoming isolated from the existing settlement
• Poor condition of the existing school
• An underused main shopping area, and a popular but poorly located market

But little was done when funds were available and now cash is tight action seems to have stopped all together. All the talking and quango involvement has done nowt. What a shame the hot air and cash wasted wasn’t better directed into action! 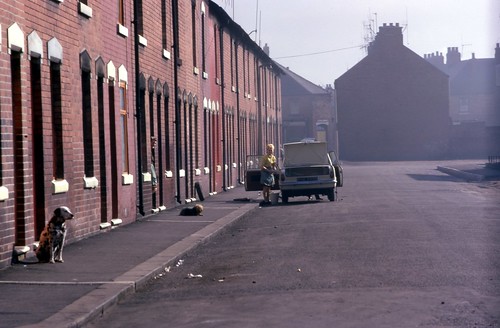 This one features the air pollution which struck me when I visited the area for the first time that same Easter. Of course these days the air is crystal clear. No mines, no jobs, no air pollution!
My mother-in-law told me how her mother-in-law (Edgar’s mother) on a visit to their new home on the Hampshire coast said: “You don’t wash your curtains very often, do you Sheila?” Apart from not being exactly the way to endear yourself to your daughter- in-law, this highlighted the extent to which the struggle to keep the home clean in the coalfield just didn’t pose the same problem down South.
Note that by 1968 at least one family in Queen Street had a car to wash of a Sunday morning, and everyone appears to have a telly.
I think that during his Easter 1968 trip to Yorkshire Edgar must have been consciously trying to record the place, time and people with a few quality shots.
From by florriebassingbourn, on Flickr under Creative Commons (above)
Goldthorpe – backs also from florriebassingbourn, on Flickr shot by Edgar (top)
Thanks, the photographs are evocative of another era.
Big Issue North
Exterior picture of Goldthorpe Church by Dearnsman

The Church of St John and St Mary Magdalene, Goldthorpe was designed in 1914 by Arthur Nutt for Charles Lindley Wood, 2nd Viscount Halifax. The church is one of the earliest structures built with ferro-concrete. It is now a grade 2 listed building. The rusted steel has been refurbished with help from the Heritage fund.