Folly or Sculpture at Harlow Carr 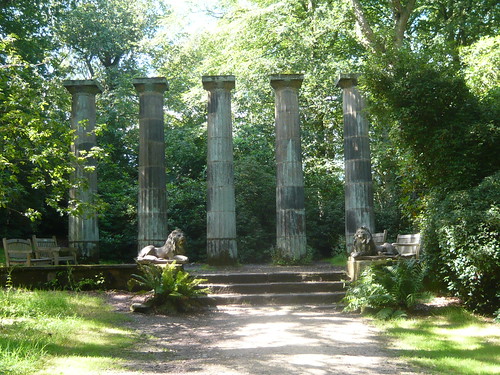 It isn’t a folly to link sculpture with a classic garden like the Royal Horticultural Society ‘s  Harlow Carr. The former Doric columns were part of the entrance to Harrogate’s Cheltenham Pump Room and later the Spa Concert Hall. Now as salvage, or recycling in the modern manner, these columns are tucked in a sunny glade in the woods. The six giant columns, with the two lions keeping guard at the base, are one of the many attractions that draw children away from looking at plants to appreciate the many features Harlow Carr has to offer.

Originally Harlow Carr once vied with Harrogate as a spa with a hotel and hydropathic centre with sulphur springs and Chalybeate (Iron) waters. In the 17th Century it was said

‘These waters youth in age renew
Strength to the weak and sickly add
Give the pale cheek a rosy hue
And cheerful spirits to the sad.’

That is cheering of spirits and creation of a healthy glow is now the job of the flowers, walks and gardens of Harlow Carr.

Harlow Carr was the trial grounds for the Northern Horticultural Society since 1949 with extra land added in 1955 and 1958. Since the RHS amalgamated with the Northern Horticultural Society there has been an ongoing investment programme and there is much to see and do on the site. Bird hides, bee keeping, fruit growing demonstrations and a library currently housed in the former suite of baths built in 1844 are just a few of the activities. Spot the sculptures as you go around the gardens or see them on Gardeners Tips The woven willow structures are part of the living sculpture series first introduced by Mathew Wilson.

It would be Folly not to take a trip to look at Harlow Carr with its historic links, great gardens and new features like the Alpine House, Bettys Tea Rooms and the learning centre currently being developed.

One Response to Folly or Sculpture at Harlow Carr