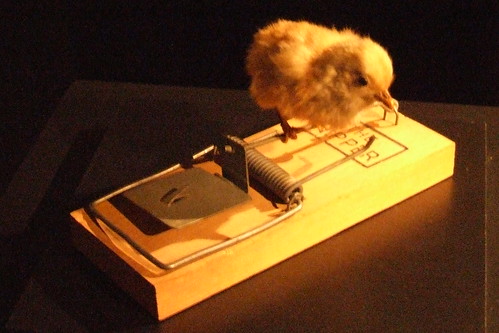 Yorkshire is full of inventive and innovative characters and none more so than the Inventors and Entrepreneurs of the Little Nipper mouse trap and Cats Eyes.

James Henry Atkinson was born in Leeds (1849-1942) filed applications for patents on several different inventions but the one he is most famous for is his mousetrap originally GB 13277 of 1899. After making several prototypes and versions he eventually came up with the trap he christened ‘The Little Nipper’ in 1909. ‘The Little Nipper’ is a simple device with a spring-loaded bar and a baited trip to release it. Cheese is the traditional bait but chocolate and peanut butter are said to work even better. The invention was successful because it did a job that needed doing in an effective manner and it had a brand that was licensed to a manufacturing company Procters who 100 years later are still selling Little Nippers.

If Little Nipper was the Mouse then on to the Cat and Percy Shaw of Halifax who was another long lived Yorkshire inventor (1890-1976). Percy’s ‘Cats Eyes’ were patented in 1935 and Reflecting Roadstuds Limited was founded in Halifax to manufacture them. The name Catseye was their trademark based on one of Percys (fanciful?) stories about a cat on a fence along the edge of a road that looked at the car, reflected his headlights back to him, allowing him to drive more safely. ‘In an interview with Alan Whicker he told a different story of being inspired on a foggy night to think of a way of moving the reflective studs on a road sign to the road surface. Further, local school children who were taken on visits to the factory in the late 1970s were told that the idea came from Shaw seeing light reflected from his car headlamps by tram tracks in the road on a foggy night. The tram tracks were polished by the passing of trams and by following the advancing reflection.’ wikipedia.
With media exposure and a world class product whose exports earned Percy Shaw the OBE he created one of Yorkshires most well known inventions.

This entry was posted in Our Yorkshire, Yorkshire Business and Money and tagged inventions. Bookmark the permalink.