Weatherby whaler fish and chip shop is very popular on Thursday’s the local market day in town.
The free riverside car park gets busy but you can usually find a space. 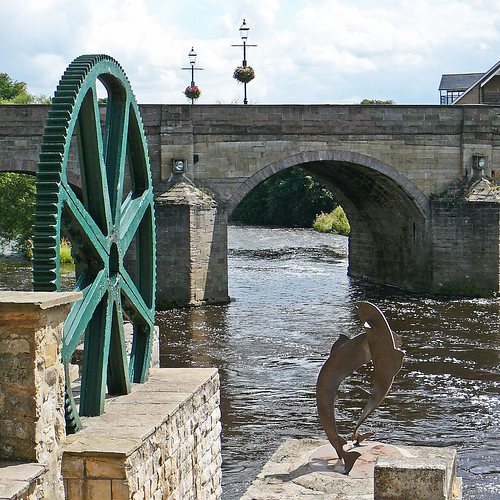 A market town, with a Charter since 1240, Wetherby is a small town with a big riverside frontage. The Wharfe provides visitors with fine riverside walks, picnic areas and a local cafe near the car park.

Wetherby Railway Path not surprisingly runs through Wetherby (that is more than the trains do Dr Beeching). Now starting in Spofforth it follows the old railway track through Kirk Deighton and the railway triangle to the town centre where it is joined by the West Yorkshire Cycle Route. By now it has been named The Harland Way after the late Lions Club president. Then it has been extended to Walton Gate and Thorp Arch Estate.

Sustrans invest in Cycle paths but this route is suitable for walkers, riders and horses. It will eventually be extended to Tadcaster and    York whilst the West Yorkshire cycle route heads off south.

Other Locations and Factoids

credits Cog and Fish 2 by Tim Green aka atoach CC BY 2.0