‘Coughs and sneezes spread diseases – trap your germs in a handkerchief.’  This slogan was first used during the 1918-20 influenza epidemic. Other earlier measures and problems are reminiscent of our own corona virus problems. 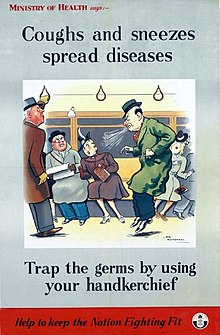 Medically speaking November has never been a good month. Consider some of these reports from Leeds in the 19th century.

In the Leeds Intelligencer of 14 December 1801, it was reported that ‘…. there was also a leading article advocating the establishment of a House of Recovery in Leeds in which it is mentioned that in Manchester, as the result of an institution of this kind, the number of fever-patients was reduced during the first year from 2,880 to 1,759 and there was a decrease of 400 burials during the same period (but we do not know whether there had been a decrease in other places without such an institution).’

It is noteworthy that Leeds survived and thrived these and other infectious problems. Much of the control was locally generated resulting from local diagnosis and intervention.

This entry was posted in Our Yorkshire, Yorkshire History and Heritage and tagged health. Bookmark the permalink.