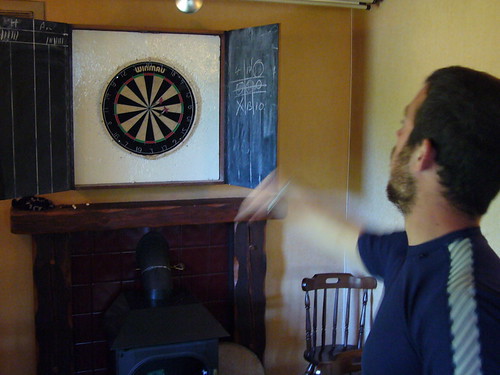 ‘Yorkshire darts (no triples) at the Arncliffe Arms in Glaisdale… they do a good burger.’

Early London dart boards were divided into 12 segments with each segment worth 5,10,15 or 20 with doubles and trebles.
Between 1910 and 1920 along came a Dewsbury dominoes and darts enthusiast Thomas William Buckle who built Yorkshire dart boards which he sold to pubs around the county. Tom’s boards had an outer ring for doubles but no trebles ring and no central ring around the bull for twenty five.
The numbering pattern 20,1,18,4,13 etc that we are familiar with today was created by Tom for the Yorkshire board and subsequently copied on the London boards that also incorporated the trebles and 25 rings.
Yorkshire dart boards flourished until the 1970’s but then fell from popularity when the British Darts Organisation BDO made the London board the dart board of choice for all major darts competitions.

Tom Buckle was a wire worker by trade and the numbers were originally make out of twisted wire. I think that was so that bad arrows could bounce off and you could claim it was the rim of the double.

There is another claim to be the inventor of the numbering system from a Lancastrian Brian Gamlin, a carpenter from Bury but there is no proof of this claim.

Other special dart boards like London Fives, Narrow Fives and regional boards like the Kent Doubles, Burton board and the Tonbridge Boards are now very hard to find.

Winmau Yorkshire Specialist Bristle Dartboards can still be bought from amazon for around £42. 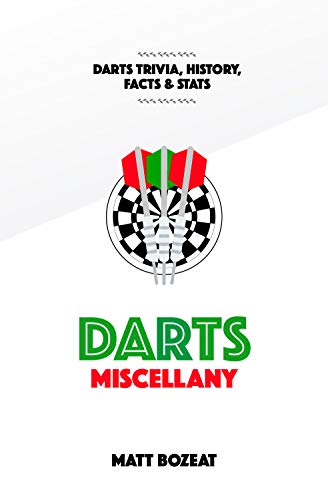 A ‘Darts Miscellany: History, Trivia, Facts & Stats from the World of Darts’ by Matt Bozeat should cover the Yorkshire board in more detail.
Patrick Chaplin is an expert on all matters connected to The Yorkshire Dartboard and his new book 180! Fascinating Darts Facts is about to be released 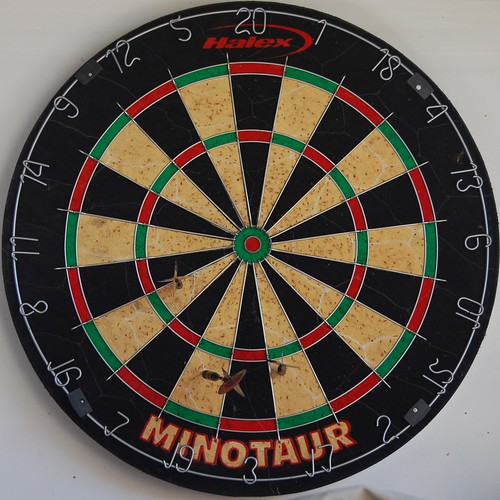 The bull of your Yorkshire Dartboard should be 5ft 6ins off the ground.
The normal ‘Oche’ should be 7ft 2ins from the board and 9 ft to the bull (thanks to pythagoras). Some Yorkshire rules allow a throw from 7ft – 8ft 6inches from the board.
Since the 1920s the throwing line was called the ‘Hockey’ and not ‘Oche’. Oche is a modern version that fits with TV coverage.
The name outer bull or half bull is bullxxxx when you only have one inner bullseye scoring 50.
Photo Credits
Day 13 by Kloeffon, CC BY-NC-SA 2.0
Dart board by cbcastro, CC BY-NC 2.0