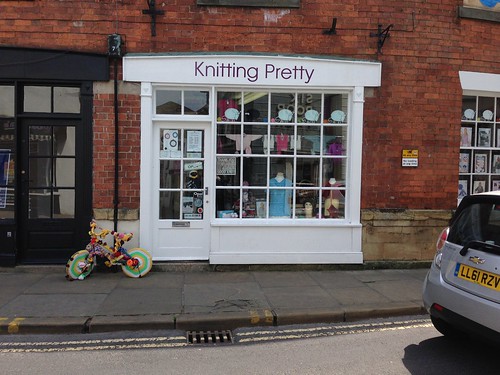 Baa Baa Brighouse has teamed up with a number of Yorkshire based indie dyers to bring you the Yan Tan Tethera Yarn Club. They produce specialty yarns, that have been reared, sheared, spun or dyed in ‘God’s Own County’ (as easy as one two three). The big nits of Sirdar, Rowan and Wendy brands are still based in Yorkshire along with many other smaller yarn producers.

Knitting Pretty is a ‘purl one’ of Knaresborough’s independent businesses and it hasn’t dropped a stitch recently.  Based in Castlegate it has won a Best Dressed Premises award for 2017. (I guess it is best dressed in woolies as it needs to be dressed or it wouldn’t have a stitch on)