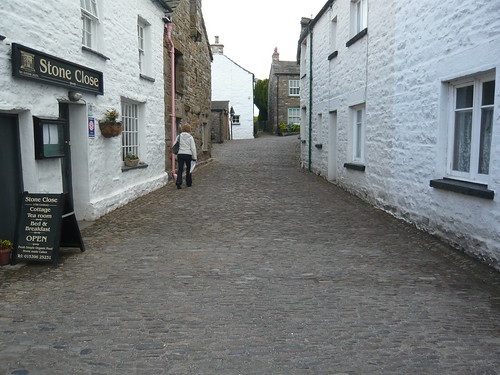 A trip to Dentdale and a drink in the local hostelries of Dent wont make much of a dent in your bank balance. Fresh air in this valley is free and that should appeal to all Yorkshire folk.

In addition to the Sun Inn shown above I can recommend the George & Dragon or the Sportsmans Inn at near by Cowgill. Both serve good beer and have bed and breakfast accommodation that I have tested several times. When I was walking through Dent on a dalesway trek I was put up in the old Vicarage and very nice and welcoming it was too.

St Andrews church was built in the 12th century and has flagstones of locally quarried black marble once a famous export.

Dent is famous for its knitters. In the 18th century, both men and women knitted, often while walking to the fields. Their output of hand-knitted gloves and socks was enormous, providing an important supplementary income. If you want to learn more about the social conditions and customs of the dale call in at the Dent Village Heritage Centre and learn about the ‘Terrible Knitters of Dent’.
Men, women and children knitted massive amounts of woollen knitwear for sale in distant towns and cities. Taught from childhood, the residents of Dent and Dentdale soon gained a reputation because of their incredible speed and productivity. It seemed that every spare minute was spent knitting – but it was a much needed supplement to the meager family incomes of farmers and lead-miners alike.
The knitters held a rough looking knitting stick under their arm pit so as to keep one hand free for ‘what ever’. They are reputed to keep knitting unless asleep or at Church!
This ancient tradition still survives, beside the Village Green in Dent you can find Sophies Wild Woollens, producing exquisite quality designer knitwear.
Bringing Knitting up to date you can read Knitting for Yorkshire here. 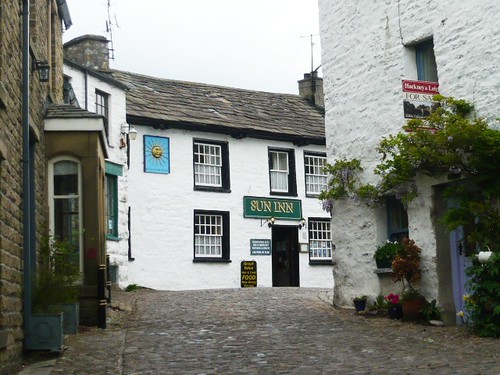 This is a tea room at Dent that refreshes the parts other drinks have not had chance to reach. Photo above
Dent Brewery in Dentdale is one of the most remote breweries in the Country but none the worse for that with its clean spring water ideal for beer.
There are half a dozen different beers. If you want to drink ‘Ramsbottom’ then you may be on a ‘Kamikaze’ drink but T’Owd Tup at 6.0% ABV is top of the Dent beers.

Read about Yorkshires Rag Rugs and ragging or stick to the Knitting.
Dent Dentdale and Cowgill contains some interesting and unusual facts about the area.

This entry was posted in Food and Drink & Yorkshire Products, Our Yorkshire, Yorkshire History and Heritage. Bookmark the permalink.