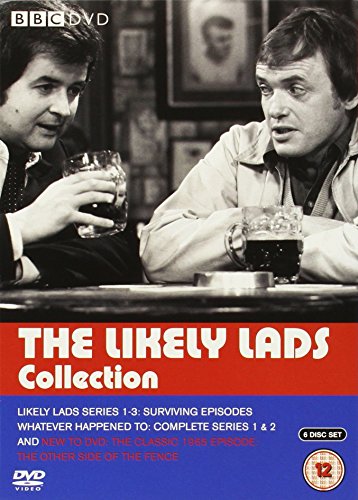 Rodney Bewes was born near Bingley Grammar School in 1939 and was a sickly child suffering from asthma. At the age of 12 he read in the Daily Herald that the BBC wanted some child actors and he wrote in, was auditioned and featured in several Children’s Hour programmes.
Rodney moved to London aged 14 to study at RADA but was expelled for failing to work. Undaunted he developed his acting career and was cast in Billy Liar alongside Tom Courtney, Julie Christie Wilfred Pickles and Leonard Rossiter. Billy Liar was largely filmed in Bradford as a 1963 film based on the novel by Keith Waterhouse. It was directed by John Schlesinger.

Rodney Bewes as Mr Rodney wrote, produced and sometimes presented Basil Brush – Ha Ha Ha Boom Boom! It was the Likely Lads and Whatever Happened to the Likely Lads that made Rodney a household name.

The Likely Lads starring Rodney Bewes as Bob Ferris and James Bolam as Terry Collier is an aimless but endlessly entertaining saga that ran from 1963 when it featured on Christmas Night with the Stars. Written by Dick Clement and Ian La Frenais’ the script and characterisations hit a funny bone on the elbo of the public. The series is the equal of Porridge, Auf Wiedersehen Pet, Fawlty Towers, Dads Army, or Blackadder in the minds of many.
Bob often found himself ‘timidly chafing at the clutches of domestic “bliss” as personified by wife Thelma. He’s frustrated by or jealous of the footloose Terry who thinks the world has done him a bad turn.
December 1964 episodes were Entente Cordiale, Double Date and Older Women Are More Experienced, giving some clue as to the basis for the laddish humor that also gave the odd chortle to all the family.

The series was watched by some 27 million people and the sitcom made Rodney Bewes and James Bolam household names. Friends in the series Rodney’s TV jealousy continued as he fell out with James Bolam over the rights to earn fees for repeat showing. Rodney also had a high profile dispute with George Harrison’s widow over a garden fence. A case of ‘Bewes Bingley Bitchiness’ or a Likely Lad still putting it around?  It has also been reported that he told a harmless but personal story about James Bolam and his wife in a  press interview and despite seeking to apologise  Bolam put the phone down and has ever spoke to him again.