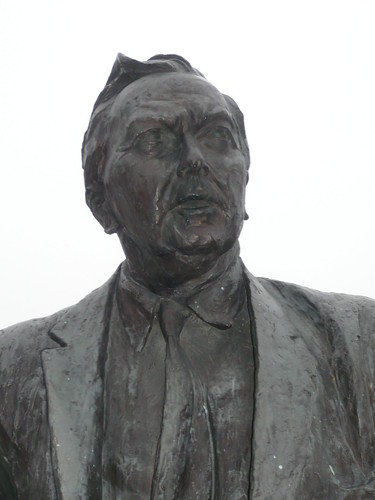 Baron Wilson of Rievaulx, KG, OBE, 11 March 1916 – 24 May 1995
Harold Wilson was born in Huddersfield where this statue is on display. He attended Royds Hall Grammar School, Huddersfield and Jesus College Oxford where his intellect enabled him to become a don at the age of 21. He wrote ‘A New Deal for Coal’ before becoming an MP for Ormskirk.
When Hugh Gaitskell died in 1963, Wilson was one of the main contenders for the party leadership and defeated his more right-wing rivals George Brown and James Callaghan. As leader he won a narrow margin of 4 seats in the 1964 elections.

Quotations and Sayings of Harold Wilson

Books by or about Harold Wilson from Amazon