Jessica Ennis-Hill was the face of the 2012 Games in London and competed in Beijing 2008. What about Rio 2016. Jessica sat out for a period whilst she gave birth to her son Reggie before returning to international competition in 2015. She has won her second world title but is currently recovering from an achilles injury. 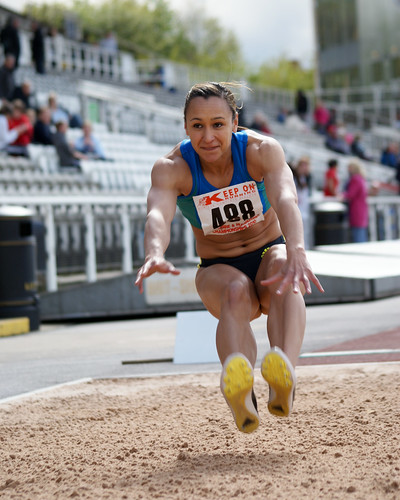 The Sheffield born and trained Heptathlete Jessica Ennis is our own World Champion in the seven event Heptathlon.

At the Olympics in 2012 she was hoping to be able to perform in the 200 metres hurdles as well as the Heptathlon. To be able to do this the timetabling would need to leave space for her to recover from her exertions in the first event.

Last weekend May 23 2010 Jessica ‘was in good form at Loughborough, a week before her scheduled attempt to break Denise Lewis’s British heptathlon record’ according to the Guardian.

Jessica Ennis the Sheffield lass was outstanding this weekend. World champion as a heptathlete, she was up against one of the best specialist hurdlers in the world, Lolo Jones. Winning the 60 metres hurdles and beating the world indoor champion in that event is extraordinary. A great performance by a great all-rounder.
“Letting a heptathlete, who practises every event, beat me when I’m only working on one thing…that’s kind of crazy but no excuses Ennis had a great race” said Lolo Jones.
Already there have been eight personal best’s from the South Yorkshirewoman in 2010 including this weekends hurdles and 1.94 meters in the highjump.
Jessica captained the British team at the Aviva International Match in Glasgow on 30 January 2010 but is to miss the Commonwealth games in Dehli this backend. Keep up to date with her career by clicking on her name.

What is the Heptathlon

Heptathlons replaced the pentathlon as the primary women’s combined event when the javelin and 800 m were added for the 1984 Olympics. The women’s outdoor heptathlon consists of the following seven events, with the first four contested on the first day, and the remaining three on day two,
100 m hurdles
high jump
shot put
200 m
long jump
javelin throw
800 m

This entry was posted in Yorkshire Folk, Yorkshire Sport and Pastimes and tagged sport. Bookmark the permalink.