The Chinese Laundry Murder of 1922.

Sing Lee had carried on a laundry business living above the shop at 231 Crookes, Sheffield in 1922. Lee Doon entered his employment only a few days earlier (don’t you just love these Chinese names). Lily Siddall a young employee left the two men together at the laundry but the following day she found Lee Doon alone and he told her that Sing Lee had gone back to China. Later Sing Lee’s body was found in a trunk in the cellar under a heap of coke and stones.
Lee Doon’s story was that Sing Lee had suggested smoking opium or taking morphine but he was found guilty of murder at Leeds assizes and despite an appeal he was hanged at Armley in 1923. 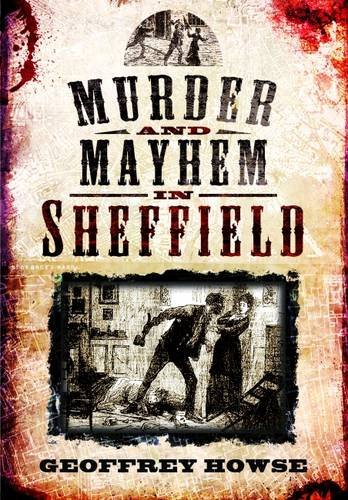 Murder and Mayhem in Sheffield by Geoffrey Howse covers the Sheffield outrages and many other murders.

The Sheffield Outrages of the 1860’s included a failed plot to murder some of Sheffield’s officials, take control of the Town Hall and set fire to the homes of prominent citizens. Watch out Nick Clegg.
In 1886 trade unionists in Sheffield were accused of using arson and murder to intimidate non-unionists.
The image of trade unions was also damaged by the revelation that William Broadhead, secretary of the Grinders Union, had paid £20 to a man to murder an employer. The leaders of the Trade Union Congress claimed that these incidents were just the work of a few individuals and that the best way to improve industrial relations was to remove the legal constraints upon the status and funds of unions. The resulting Royal Commission on Trade Unions did not include any trade unionists as appointees and only a minority report saved the day when Gladstonee eventually passed the 1871 Trade Union act.

Two different Sheffield murderers bore the same name, William Smedley. They were both hanged for their murderous crimes committed in 1875 and 1947 respectively.
The 1947 Smedley was found guilty of the murder of 27-year-old prostitute Edith Simmonite whom he claimed had given him VD (venereal disease).
In 1875 Elizabeth Firth was the common-law wife of widower William Smedley. Poverty, booze and requited love led to Smedley loosing it pulling a razor blade and slitting Elizabeth’s throat.

Other Murders Reported and Amplified by Geoffrey Howse
The notorious Sheffield Gang Wars of the 1920’s.
The fascinating case of one of Britain’s most notorious cat burglar and murderers, Charlie Peace. Executed 1879 but still remembered in novels and literature.
The gruesome Shelf Street Hatchet Murder of 1881.
The Woodhouse Murder of 1893

Other Murders Reported and Amplified in Style by Chris Hobbs
MURDER AT WHITE CROFT SHEFFIELD – 10th JULY 1884
THREE DIE IN PUBLIC HOUSE SHOOTING New Years Day 1960.
Christmas 1923 Inspector Hughes was told “I want you to go to 20 Lister Road. I believe I have done Jack Clark in with a hatchet which I have thrown away.” Hughes found a dying man on his own doorstep dressed only in his trousers and shirt. The wife of the murdered man was standing on the stairs. She said ” Jack Eastwood has done that. I don’t know what he has done it for” Read more

A man has appeared in court charged with the murder of a 41-year-old man in Sheffield on New Year’s Eve 2015/6.
Zabair Hussain was discovered badly injured on Staniforth Road  Darnall, where he later died. A man accused of murdering the Muslim pensioner in a racist attack has refused to give evidence in his defence. 17th Feb 2016 Sheffield Telegraph

This entry was posted in Yorkshire Facts - Interesting and Unusual, Yorkshire History and Heritage. Bookmark the permalink.