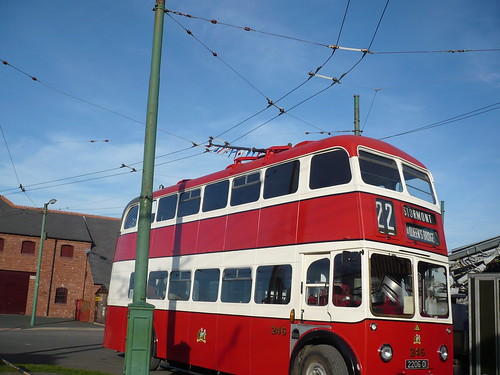 Twirlies you know are the OAP’s and people who stand at bus stops with their free passes and ask ‘are we too early’ because it is not yet 9.30am. So that is how we get our name ‘Twirlies’, it is not a trolley bus maneuver to turn around at the terminus.

Well Twirlies would have needed to get up early in the morning to catch the Bradford Corporation Trolley Bus No 7 to Thornbury.
Ten Bradford trolleybuses are now preserved at the Trolleybus Museum at Sandtoft , Lincolnshire. In the tram shed at Bradford Industrial Museum there is the pictured Trolley bus plus the only tramcar left in Bradford.

The Bradford trolleybus was an electric bus that drew its electricity from overhead wires using spring-loaded trolley-poles. Two wires and poles are required to complete the electrical circuit, unlike a tram or streetcar, which normally uses the track as part of the electrical path and thus needs only one wire and pole. This increased the amount of street furniture and the cost of maintenance. However the buses were quite, clean and exceptionally good for the hills rising from the center of Bradford to the suburbs.

Bradford became the first (1911) and last city (1972) to operate trolleybuses in the United Kingdom. Bradford introduced a one-man operated trolleybus route to Bolton Woods in 1915, with the West Yorkshire Road Car Company, which later formed the City Circle route with the link to Bankfoot and Lister Park service.

Double deck trolleybuses were first introduced in 1921. The last rear-entrance trolleybus in Britain was also in Bradford and is now owned by The Bradford Trolley Bus Association

Many of the Twirlies will have enjoyed the experience of riding to the Trolley buses but also remember the delays when they were ‘off their Trolleys’. As a Twirly my self I even remember Bradford’s trams that pre-date the trolley service but that is a whole new subject. The Trolley bus evokes a distinct nostalgic feeling and even though it is out of the county I will have to visit Sandtoft. 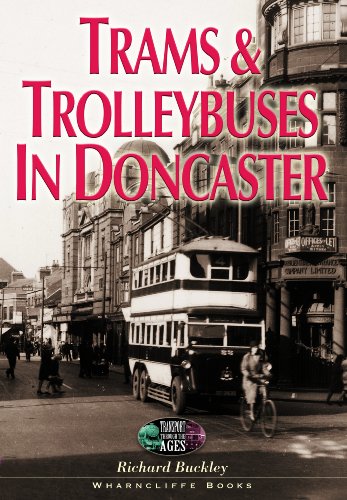 ‘In Doncaster, on June 2nd 1902, two major events took place; the peace agreement marking the end of the Boer War was celebrated and the town’s electric tramways were opened. Richard Buckley’s focus is obviously at the local level and how this astounding advent of mechanised urban transport was of great significance to the local residents of Doncaster….’ amazon Transport through the Ages.