Quarryhill flats will remain in the memory of many Leeds folk as will their unseemly demise. Leeds had it’s share of squalor and slum housing after the World War in the 1920’s.

Rev Charles Jenkinson a friend of the ‘Red Vicar’ Conrad Noel stood as a labour candidate for Leeds Council. After election he produce a paper on slum clearance that ultimately led to the building of the Quarry Hill Flats. The Director of Housing R A Livett and Rev Jenkinson visited France and Vienna in 1934 to inspect municipal tenement complexes (workers flats)  including the massive Karl Marx Hof. Then building at Quarry Hill commenced based on a plan for 5000 flats.

They were built on a quick,  structural system of pre-cast ferro-concrete cladding, mounted on steel frames. They needed less skilled labour and post war this was seen as a positive aspect of the development.  By 1941 the flats provided accommodation for 3,280 people.

1. ‘……York Road to get the bus into town and, of course, everywhere you walked, the flats were just there on the skyline; massive, often looking a bit austere. I always remember them as being off white and grey, and our parents telling us that… that inside the flats was full of nasty people…’ 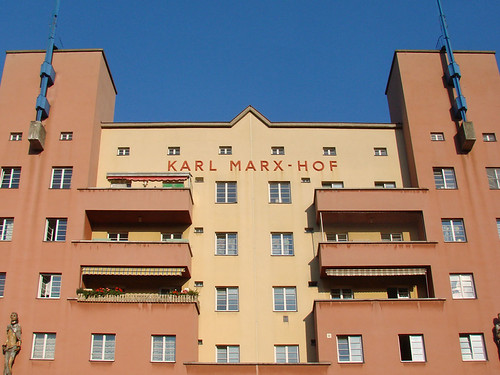 This is how Quarry Hill should look like today! (thanks Karl-Marx-Hof (Vienne) by dalbera CC BY-NC-SA 2.0)