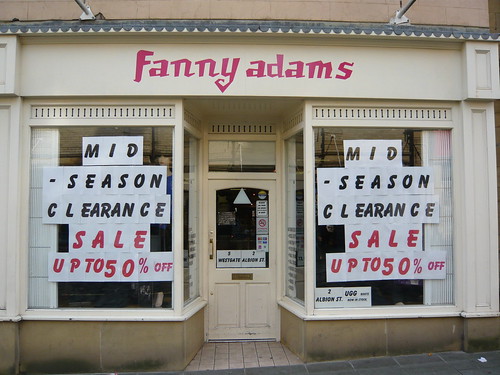 Did the proprietors of this shop in Halifax know the story of the original Fanny Adams? ‘Lest we forget’ here are some of the gruesome details. Eight-year-old Fanny Adams was brutally murdered and dismembered in August 1867. The head, eyes and ears were scattered and this notorious murder of young Fanny Adams made sensational national headlines, creating a wave of horror, revulsion and pity. A solicitor’s clerk was arrested and tried for Fanny’s murder and despite ‘it was my family upbringing defense, after only 15 minutes the jury returned a guilty verdict and Frederick Baker was hanged before a crowd of 5000 in front of Winchester County Prison on Christmas Eve 1867.

When the Royal Navy were served tins of mutton as the latest shipboard fast food in 1869, sailors gloomily declared that the butchered contents must surely be ‘Sweet Fanny Adams’. Thus “Fanny Adams” became slang for mutton or stew and then for anything worthless. Gradually accepted throughout the armed services as a euphemism for ‘sweet nothing’ it has passed into common usage as Sweet F. A.
That seems to be what is on offer in the shop window, certainly not the 1974 record ‘Sweet Fanny Adams’ by the glam rockers The Sweet but inside you may find Sweet Fanny Adams knickers from New Zealand. None of these seem to be great tributes to a murder victim despite the catchy name.

Old Books abound about Fanny Adams. Keep a look out in secondhand shops for ‘Unhand Me, Squire Or Much Ado About Sweet Fanny Adams by Richard Tydeman’ or the compendium ‘The Love, Joy, and Distress, of the Beautiful & Virtuous Miss Fanny Adams; That Was Trapan’d in a False Marriage to Lord Whatley’ and ‘Sweet FA: The true story of sweet Fanny Adams’ by Peter Cansfield.