Room at The Top for Billy Liar

Two of the greatest kitchen sink films were filmed in Yorkshire!

1. Room at The Top starred Laurence Harvey, Donald Wolfit, Simone Signoret and Heather Sears in the 1959 film of John Braine’s novel of lust and sex.
Set in fictional Warnley, Joe Lampton is set on making something of himself with the daughter of a rich industrialist.
Joe Lampton rises swiftly from the petty bureaucracy of local government into the unfamiliar world of inherited wealth, fast cars and glamorous women until he falls for a married woman, Alice Aisgil.
The film was shot in Bradford and made use of the industrial heritage in the local buildings and the pubs in the city centre. 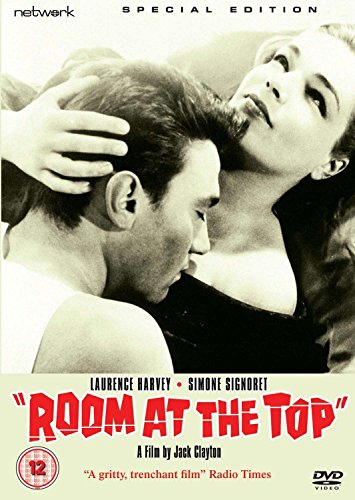 DVD or Paperback Book from Amazon.

2. Billy Liar starred Tom Courtney, Julie Christe, Rodney Bewes and Wilfed Pickles in the seminal 1962 film set in a North Country industrial town.
Working in a drab undertakers called Shadrack & Duxbury, Billy Liar escapes, Walter Mitty like, into a world of fantasy. Keith Waterhouse’s 1957 tale tells the story of Billy Fisher a teenager anti-hero who is unable to stop lying especially to his girl friends.
The film was shot on Bradford most notably using the Victorian cemetery at Undercliffe and the city’s war memorial.

Other films with a similar appeal include A Place in the Sun, Look Back in Anger, Saturday Night and Sunday Morning, and A Taste of Honey. Regrettably they have less obvious Yorkshire connections. They were created by group of young British writers were referred to as “angry young men”. They focused on their view that society was dominated by materialistic values (seems familiar).