The Super Language of God’s Own Country

The great language I refer to is that used in the first book by Yorkshire author Ross Raisin. He credits the Yorkshire Dictionary of Dialect, Tradition and Folklore by Arnold Kellett which is used to spice up the sense of place in this entertaining tale.

What the Papers Say

The reviewers and critics seem to take a shine to God’s Own Country.
‘Very Funny, Utterly Compelling, Masterful, Remarkable, Unforgettable and Beautiful’ are the word used by the Guardian, Sunday Telegraph, Observer. Sunday Times, Financial Times and Independent respectively.
No wonder the book was put up for many prizes.

This is not the use of faux Yorkshire or southern version of a bastardised northern accent. It is a funny way of turning a phrase sometimes with the use of a word that helps paint a picture without getting out of hand.
Here are just a couple of phrases I liked in the context; ‘Father grum as a miner’s arse’, ‘clagging wet’, ‘took another glug of tea’, ‘It was towns in giant tomato coats’.
I will always think of second home owners in the Dales as ‘Towns’ from now on. 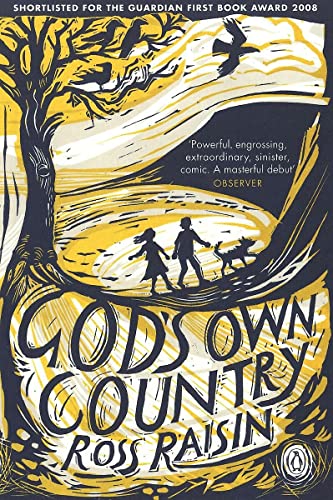 God’s Own Country by Ross Raisin.

Sam Marsdyke (Lankestein) works alone on his father’s farm after being expelled ‘unjustly?’ from school after girl problems. Quite bright but lacking in social skills. A new family arrive for ‘welly weekends and a picture postcard view out the bedroom window’. The 15 year old daughter leads 19 year old Sam into temptation and eventually into a painful conclusion.

Read once for fun and then again with a highlight pen in your hand to capture the words and phrases that can become your own ‘trunklements’.

Ross was born in 1979 in Keighley although he now says he was born between Ilkley and Bradford where he attended Bradford Grammar School. 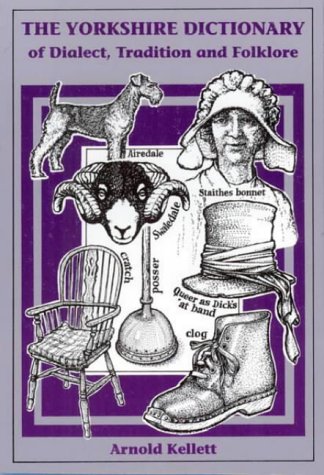 The Yorkshire Dictionary of Dialect, Tradition and Folklore by Arnold Kellett