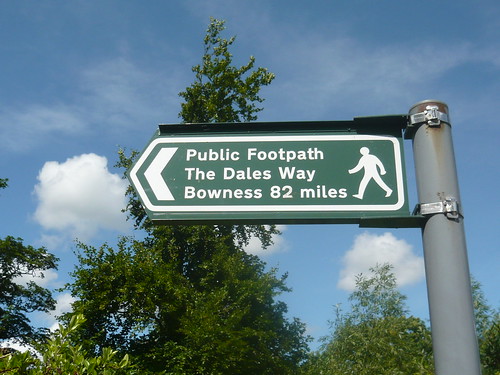 Holiday in Ilkley like the Victorians used to do using Shanks’s Pony. You do not have to walk all of the Dales Way to have a good holiday with fresh air and exercise. The River Wharfe runs through the town and you can follow it down stream to Denton and Ben Rhydding or up stream on the reasonably flat walks to Addingham.  Before tackling the Moors themselves there are several more challenging walks on the rivers northern shore to Beamsley Beacon or Mount Calvary and Middleton Woods.

The moors have two main routes running north to south. From the town centre you can go straoight up and across to Dick Hudsons and on over Baildon moor to Shipley. The other route heads south west up the track towards Keighley old road. The heather moors are precious resourses and walkers are encouraged to stick to the main pathways.

On the moor there are many features to visit such as White Wells, Cow and Calf Rocks and the Tarn or Hebers Ghyll and the Swastika Stone. Simple directions for the famous walk across the moor to Dick Hudsons   (with acknowledgement to Ilkley.org) Leave the centre of Ilkley up Wells Road to the cattle grid, then aim up the hillside to White Wells. Take the path to the rear of the buildings towards Ilkley Crags and up the steps to a cairn at the top. Go forward along a broad track, partly a board walk and often a bit boggy, past the boundary stone of Lanshaw Lad and the Twelve Apostles stone circle. Ahead is Baildon Moor with Otley Chevin to the left and Almscliff Crag in the distance. Cross a wall by a stile and continue to a rough walled track down leading to the road and Dick Hudsons, the renown watering hole and foody pub.

When you are worn out from walking you may find a show at The Kings Hall or Ilkley Playhouse.  Alternatively read  ‘On Ilkley Moor’ by Tom Binding (a journey into the heart of Yorkshire gone by) whilst you are on Ilkley Moor or sat in the bar at the Cow and Calf hotel.

Read about views on top of Ilkley 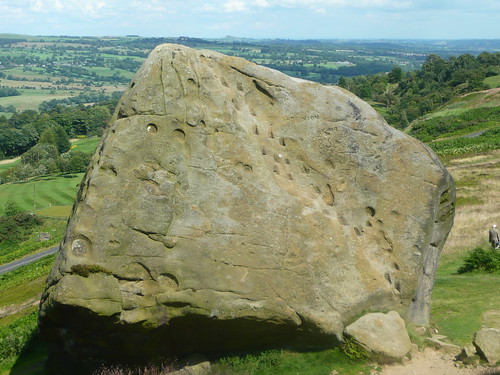 Foot path?  up the Calf rock at the Cow and Calf with the Wharfe valley below.

Detail of the following walks can be found on downloadable walks

Read more about the heather on the moors.

The local tourist information center next to the library and the Kings Hall has more walking information.

5 Responses to Walking Around Ilkley