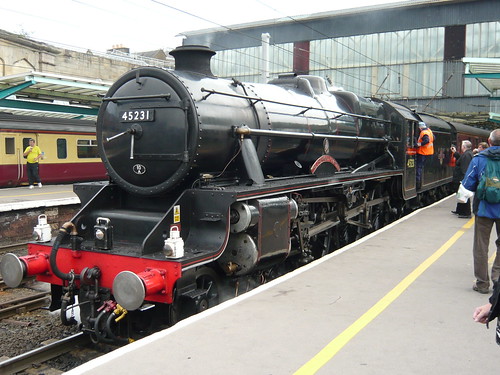 A couple of years back we had a nostalgic trip by steam train with the Railway Touring Company.  Joining at Shipley the 12 coaches had already picked up passengers at York and Leeds so  engine no. 45231 had a full head of steam. We were just along for the ride and food but there were many ‘Steam Engine Buffs’ chatting away about times gone by and preservation activities they had been involved with.

After a ‘Full English Breakfast’ about 10 minutes out of Skipton the train ran out of water and ground to a halt 2 miles short of its water refueling stop at Hellifield. Consternation in the cab was no doubt allayed when the fire brigade came to the rescue running hoses across fields into the river Aire at Coniston Cold and pumping water into the tender. I have never traveled on a train that was one and half hours late yet most people were in a good mood about the delay. For our part it gave us time for a ploghmans lunch and drink on the train as we crossed Ribblehead viaduct through Dent station and on to Carlisle. 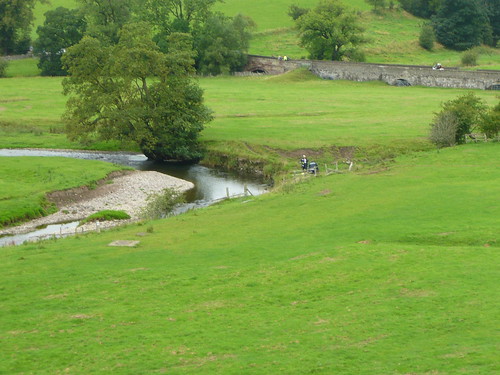 Firemen from the brigade, not the train, putting their pump into the river at Coniston Cold 18th August 2009. The engine driver had thoughtfully stopped by the bridge when he realised the problem. During the less eventful return journey to Shipley we enjoyed our third on board meal,  a full 4 course dinner, and  got to our station at 8.45 pm after a full day out.

The engine 45231 called ‘The Sherwood Forester’ is also used on the York to Scarborough summer private hire specials and if the trip is half as good as York to Carlisle one then you would do well to treat yourself. The operator was Railway Touring Co.

With the concerns of the health and safety mafia, about sparks from trains causing track-side fires, I am going to find another trip before they are banned all together.

This entry was posted in Food and Drink & Yorkshire Products, Yorkshire Trips and Places. Bookmark the permalink.