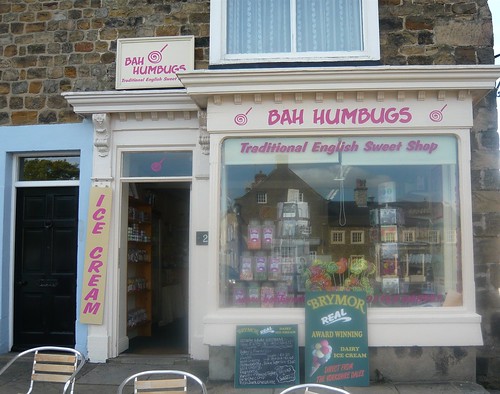 Masham is really for beer not sweets but in the corner of the  market square is a shop to treasure. Not only because they offer Licourice sweets from New Zealand, Holland and Pontefract but because they seem to be going the extra mile in the provision of treats for the sweet-toothed amongst us. ‘Yorkshire Mixture’ is another favourite a Northern Classic of boiled sweets in an assortment of different shapes and flavours including Pear Drops, Fruit Rock & Fishes and mint rock.

I do not want to drive you away from this web site by if you want to look inside the digital sweetshop of Bah Humbug then click here.

With winter and flu nearly upon us why not stock up with some winter warmers like Coltsfoot Rock, Paynes Original Army & Navy Tablets or real Cough Candy. Too say nothing of Aniseed Balls and the retro range including ABC Candy Letters, Dip Dabs, Double Dips, Shrimps, Anglo Bubbly, Black Jacks, Refreshers and Lover Hearts .

Maxons Humbug Suppliers to the World

Maxons of Sheffield is one of the few remaining traditional sweet manufacturers in England specialising in boiled sugar and flavoured sherbet. Maxons continues as a privately owned, independent, manufacturing company under the direction the original Pitchfork family. Henry Dixon Ltd. had existed since the late nineteenth century and had acquired a significant reputation and history in the area. Following the end of sweet rationing in 1953, both the wholesale and manufacturing began to expand and, in 1958, they all merged.
The traditional brands, as supplied to Bah Humbug, of Maxons, Dixons, and Jesmona account for the majority of production. Traditional products like Pineapple chunks, Pear Drops and Yorkshire Mixture are made along side Black Bullets, Sherbert Fruits and Humbugs.

This entry was posted in Food and Drink & Yorkshire Products, Our Yorkshire, Yorkshire Business and Money. Bookmark the permalink.