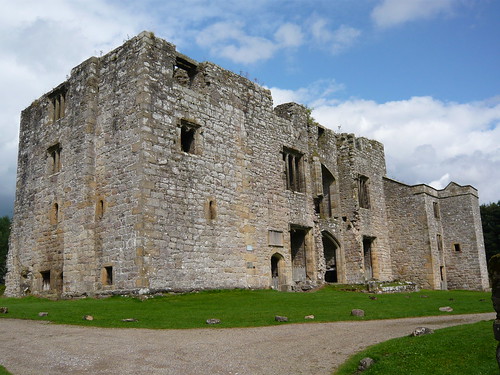 Twixt Appletreewick and Bolton Abbey is Barden Tower the former residence of Lord Henry Clifford. Built in the 15th century it has suffered several periods of decay and decline and is the ruin you now see. Nearby is Barden Bridge a 17th Century Arch bridge that is designated an ancient monument. There is some parking and plenty of interesting walks near by including access to the Dales Way that follows the northern bank of the river Wharfe up stream from the nearby Strid cottage. Over looked by the ruin is the old Priest’s House which housed the ‘Clifford’s’ private Chaplain. This is now a popular restaurant with a bunk barn for walkers or diners.

Henry Clifford was the eldest son of John ‘The Butcher’ Clifford who was know for his hatred of the Yorkists. Following his fathers death at the battle of Towton, Henry was hidden for 24 years until after the battle of Bosworth and now thirty-one years old, he was restored to his estates and titles by Henry VII who knighted him. Henry assisted the Earl of Surrey and fought at Flodden in 1513, he was one of the principal leaders with a large retinue and even brought home to Skipton Castle some Scottish ordnance.
Having spent his childhood and early years with a shepherd family he had little education and used Barden Tower as a place to learn and study.
Having regained his property and position, he immediately began to repair his castles and improve his education. He quickly learnt to write his own name; and, to facilitate his studies, built Barden Tower, near Bolton Priory, that he might place himself under the tuition of some learned monks there, and apply himself to astronomy, and other favourite sciences of the period.

Psychic evenings at the Priests House are a relaxed and entertaining event. ‘The setting couldn’t be better, the remote 15th century former Priests House built to service the historic Barden Tower is located in the heart of the Yorkshire Dales. Barden Tower is now just a ruin but is steeped in history and is said to be haunted.
Psychic suppers are a great opportunity to get messages from loved ones, find out more about relationships, love, finances, health and work from some of the top local mediums and spiritualists.’
Psychic suppers are held approximately every monthly and your own group or couples can book for a cost for the evening of £30 (but you knew this if you were psychic).

‘Perched in front of the stunning backdrop of historic Barden Tower and nestled in the natural beauty of the Upper Wharfedale Valley, The Priests House is a superb ancient Yorkshire venue which has proved universally popular with guests of all ages. The Priests House is a Grade 1 listed building and thus steeped in history, and enjoys an excellent reputation for the quality of its restaurant and service. The buildings of The Priests House themselves hark back to medieval times and are truly a picture of dramatic beauty in a striking natural environment. Some medieval weapons have been found including an ancient pike said to be used at the Battle of Flodden and a long bow. Underneath and to the rear of the restaurant is the derelict Barden chapel, from which The Priests House gets its original purpose.’ Now a new purpose has been added with the eat, drink and make merry Medieval Yorkshire Banquets that can be enjoyed alongside Barden Tower.

This entry was posted in Food and Drink & Yorkshire Products, Our Yorkshire, Yorkshire History and Heritage. Bookmark the permalink.