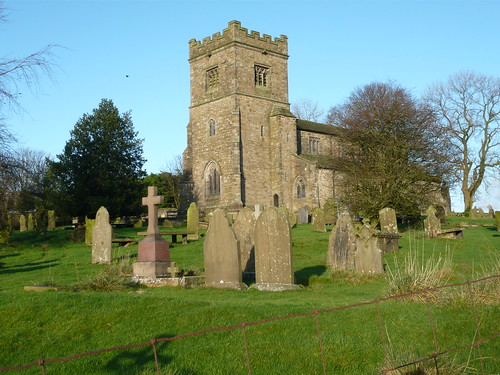 St Peter’s church in Rylstone stands above the village made famous in recent times by the Alternative Womens Institute calendar. As the church and graveyard can testify there has been a vibrant community in the locality for many centuries. Perhaps vibrant is not the best phrase.

The duck pond was looking a bit forlorn when I visited this week but the area around the village is well kept and feels homely. 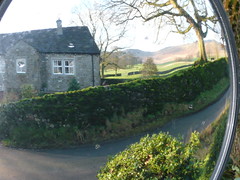 A quirky look at the village can be observed from several convex mirrors designed to help motorists.

John Richard Baker a National Park Officer for the Yorkshire Dales, died in July 1998 at the age of 54 as a result of Leukaemia. His wife Angela Baker and her friends from Rylstone local WI, had the idea of the “Alternative WI calendar” to raise funds for Leukaemia & Lymphoma research. This idea provided much mirth and entertainment for her husband throughout the later part of his illness but regrettably he did not live to see the calendar and the great success that followed.

To donate to Leukaemia Research 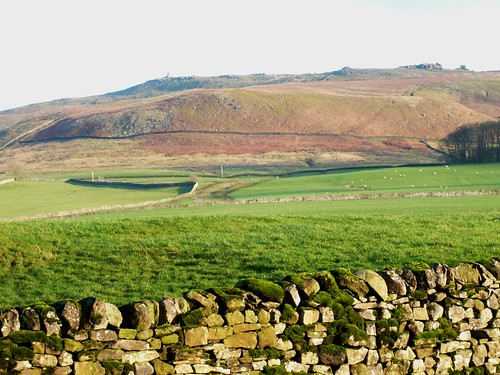 Barden Moor and Fell with the twin skyline landmarks of Rylstone Cross and Cracoe Pinnacle from the church. The drystone walls were in excellent order and the late afternoon winter light made the whole area glow.
Geologically Rylstone ridge near Skipton is one of the most scenic Yorkshire grit crags, with fine views across Barden Moor, Wharfedale and the Malham hills. It is well known amongst boulderers for it’s quiet location. There are several good walks from Rylstone including one that takes you along Rylstone edge to Cracoe or along the former railway track that was closed in 1962.

To the south is Norton Tower a 16th Century square tower built by Richard Norton but damage in 1569 and now sadly just a ruin.

There are several good eating places and hostelries in the near by villages and Rylstone is worth a trip if you are feeling like a bit of exercise.

This entry was posted in Books Club & Literary Work, Our Yorkshire, Yorkshire Trips and Places and tagged Travelogue. Bookmark the permalink.