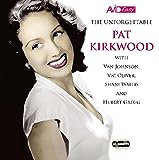 Being remembered more for an alleged affair with the Duke of Edinburgh than a glittering career as a musical actress could make anyone angry!
Her fourth husband, Peter Knight, a former president of the Bradford and Bingley Building Society, said: “She never once complained to me, or to anyone else, about the lack of official recognition, though I know it hurt her very deeply” angry again I guess.
One newspaper headline called it ‘The Duke and the Chorus Girl Affair’. Pat displayed her anger by retorting ‘I had never been in the Chorus in my life’, she was always a showgirl and musical success story.

This anger is being channeled into a new show funded by Opera North. It is written by and stars Yorkshire actress Jessica Walker. There is a lot of material to develop about Pat Kirkwood, who died in Ilkley on Christmas Day 2007 aged 86.

When Pat Kirkwood died on Christmas Day 2007, the world-wide media coverage focussed on two things: her fabulous legs, once described by Kenneth Tynan as the eighth wonder of the world, and her rumoured relationship with Prince Philip. If you get a chance the new show called fittingly ‘Pat Kirkwood is Angry’ will display more talent than invective.

One Response to Pat Kirkwood is Angry