‘Footballers wives’ this book definitely isn’t despite our weak link to the chairman of Leeds United.
Anna-Lou Weatherley, former acting editor of Smash hits, has previously written a couple of romantic fiction titles, ‘Ibiza Summer’ and ‘The Wrong Boy’. Chelsea Wives moves up a gear and focuses on ‘The Ladies that Lunch’. 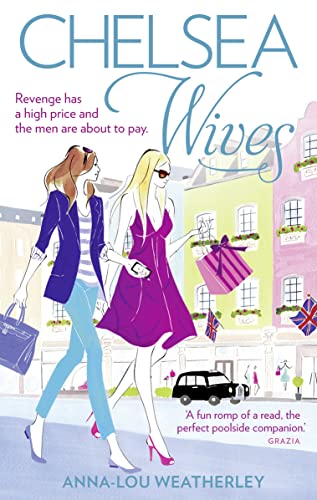 ‘A fun, romp of a read, the perfect poolside companion’ Grazia
‘Revenge has a high price and the men are about to pay’. cover
‘This is Desperate Housewives meets First Wives Club set in the glamorous borough of Chelsea.’ amazon

Characters set in ‘exotic locations of designer boutiques and London’s high society scene are these Chelsea Wives, Imogen, the beautiful ex-model, Calgary, the glamorous, former fashion editor, and Yasmin, the feisty ex-party girl.
But life isn’t all champagne and canapés in Chelsea. Plagued by personal tragedy and united by failing marriages, Imogen, Calgary and Yasmin mastermind a shocking plan to get the ultimate revenge on their husbands.’

One to consider for an afternoon when the other half is at Elland Road Leeds watching the football.
Doubtless Chelsea Wives will be heavily promoted as a holiday read for the under 40’s.
Books are cheap entertainment so what have you got to loose with Chelsea Wives? With Leeds United you may loose!