Best known for his role in Billy Liar Sir Tom Courtenay received the 2015 award for best actor for his role in the film ’45 Years’. His co-star Charlotte Rampling was named best actress.

The 77-year-old actor was born in Hull near the city’s fish docks and is president of the Hull City official supporters club. 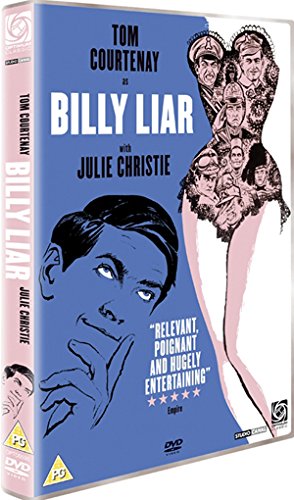 Charades will not be the same after the death of Billy Liar the author of ‘Keith Waterhouse. Is it a book, a film or a play? Yes! mimes the reply.

Still fresh after 50 years, Billy Liars’s novel about a compulsive dissembler who can’t handle reality is funny, sweet, and heartbreakingly sad. Set at the tail end of 1950s, the story is told by Keith Waterhouse, who lives with his parents in the fictional Yorkshire town of Stradhoughton. Keith can’t cope with his tedious clerking job at a local funeral parlor, living at home, or really anything about his life, and so, spends a great deal of time escaping into fantasy world in his head called Ambrosia. When he’s not imagining life as prime minister of his make-believe country, he’s spinning mostly purposeless lies to almost everyone he meets. Sometimes he’s lying to cover up real misdeeds, such as his small-time embezzling, other times, his lies are completely pointless, such as telling a friend’s mother about his fictional sister.

Billy grew up in Leeds, and like Waterhouse, worked as a clerk in an undertakers. 50 years since he wrote Keith Waterhouse, which began life as a book before becoming a hit West End play and film. Billy remembers there was a storm of complaints when it first appeared in the theatre because it had the word “bloody” in it. Fifteen times, apparently. Billy describes the word as “innocuous” and wonders what all the fuss was about. So how does the Mail spell it in the headline for the piece on Saturday? “B****y”. Bloody marvellous! says Media Monkey

“To my mind, 90 per cent of the unpleasant things that happen to us are in the name of rationalisation. Counties lose their names, trains lose their livery, ginger snaps lose their flavour and mint humbugs their sharp corners … under my derationalisation programme, Yorkshire would get back its Ridings, the red telephone box would be a preserved species, there would be Pullman cars called Edna, a teashop in every high street and a proper card index in the public library.”

“Should not the Society of Indexers be known as Indexers, Society of, The?”

“I wake up with views the way some people wake up with hangovers. Sometimes I wake up with both, when the confederation of clowns presiding over our destinies had better tread carefully.””I never drink when I’m writing, but I sometimes write when I drink.”

Billy’s record in Who’s Who lists   his hobby as ‘Lunch’, he created Clogthorpe Council and was also the founder of The Association for the Abolition of the Aberrant Apostrophe 9before Trusses’).