Wars of the Roses – Towton Moor 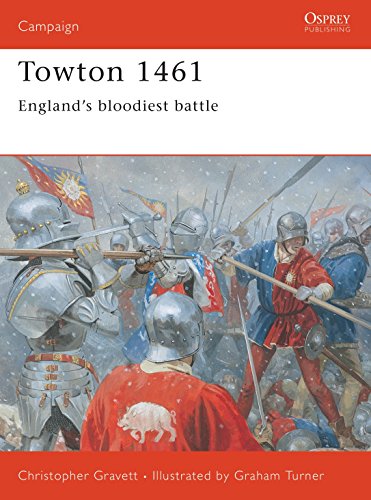 In memorial of the slaughter
When red blood ran like water
And the victors gave no quarter
In the fight on Towton Moor.

The Battle
The Lancastrians occupied high ground with the Yorkists forced to advance uphill to attack them. The Yorkist archers had the wind behind them, and therefore outranged their Lancastrian opposite numbers, who were also blinded by the driving snow blowing in their faces.
When fighting at close-quarters began it was intense and lasted for several hours until John Howard, Duke of Norfolk arrived with reinforcements. The Lancastrians became outnumbered and outflanked, and the rout began.

It is probable that more people lost their lives in the rout that followed the battle. Some Lancastrians tried to flee to Tadcaster but most of the Lancastrians were now pushed into Cock Beck where some of the worst slaughter was seen at Bloody Meadow.. The fleeing Lancastrians made easy targets for Yorkist horsemen and footsoldiers and despite a stand at Tadcaster they fled to York a beaten force.

Lord Dacre’s tomb is in Saxton All Saints Churchyard. The rumour he was buried standing upright alongside his horse was confirmed in the 19th Century when th e tomb was restored. Wars of the Roses site has details of 17 Battles including  Towton Moor where an estimated 76,000 troops fought only the day after Ferrybridge and upto 26,000 perished.

Even today over 550 years later bodies are still being discovered around Saxton, Towton and Tadcaster – Bradford University has a   Towton Mass grave project There is a 5 mile Battlefield walk from Saxton to Towton and back

The Towton Battlefield society are involved with the national project led by Shakespeare’s Globe theatre to produce and film the all plays of Shakespeare on location.

One Response to Wars of the Roses – Towton Moor