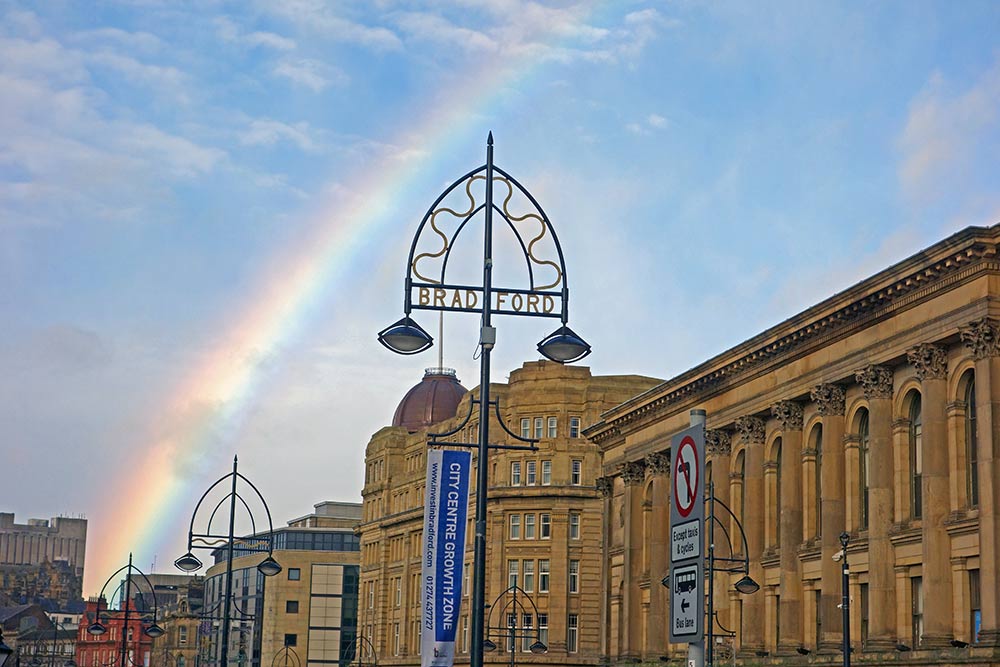 The spotlight or more accurately the facebook stained glass

The Mosque at Drewton Street Bradford. No matter where I stood for the photograph one or more lights were always in the picture. The oldest mosque in Britain is in Liverpool on the ground floor of a 19th century grade II-listed building established in 1889 by Henry William Quilliam who converted to Islam after visiting Morocco. Al-Madina Jamia Mosque at 31 Brudenell Grove Leeds LS6 1HR is one of the historic mosques in Leeds, built in the 1970s by Leeds Muslim Council with the assistance of the whole Muslim community of Leeds it has recently been refurbished. There are many multi-faith trips and visits to Temples, Mosques, Synagogues and Churches.

The Gurdwara is the centre of worship for the Sikh faith and there is a 360° view of the central Sheffield Temple on the  BBC site. The GNNSJ Leeds Gurdwara was established in December 1986 when the Ringtons Tea Factory was purchased and converted to our Gurdwara. On the 5th January 1987 the first Sri Akhand Paath in the Gurdwara was held celebrating our Guru Gobind Singh.

Hindus worship at Radha Krishna Temple, Middlesbrough studying the Vedic scriptures which describe that prior to 3000 BC knowledge was passed down by word of mouth, a great sage Vyasadeva compiled a series of literature in Sanskrit. The Mahabharata describes the history of India 5000 years ago and its 100,000 verses make it the longest poem ever written.  At that time Hindus believe Lord Krishna was present on the earth.

The Synod of the Church of England has been meeting this weekend to discuss the disproportionately large number of expensive bishops now employed when compared to the diminishing numbers of stipendiary parish clergy. I would have more sympathy if there was clear moral leadership from the Bishops but they claim they are needed to ‘manage’ the Church  – ho hum sounds too much like our politicians.

Bradford Synagogue in Bowling was  first opened in 1881. The muslim community has been instrumental in saving the grade ll listed building. This place of Jewish worship is very distinctive, being Moorish in style  and unfortunately  is less used than in the hey day of German and migrant imigrants of the 19th and 20th centuries. See the excellent site A History of Jewish Bradford