Remember the Difference between Stalactite & Stalagmite

A stalactite is named from the original Greek  stalasso “to drip” and meaning “that which drips” (drips do not go up except in science fiction.)
A stalagmite also from the Greek   stalagma is the “drop” or “drip” that ends up on the floor or running down the walls. (Sounds like a student flat)
You can remember the Greek derivation and work out which is which or you can recall the schoolboy incantation ‘As the tights come down, the mights go up!’ or another memory aid A stalactite – with a “C” – hangs from the “C”eiling in a cave system or cavern. A stalagmite – with a “G” is on the “G”round of a cave system or cavern.
Helictites are a delicate cave formation of calcium that changes its axis from the vertical at one or more stages during its growth creating a curving or angular form. Helictites have been described in several types, ribbon helictites, saws, rods, butterflies, “hands”, curly-fries, and “clumps of worms”.( I do not mind meeting Curly Fries but Clumps of Worms ugh!) 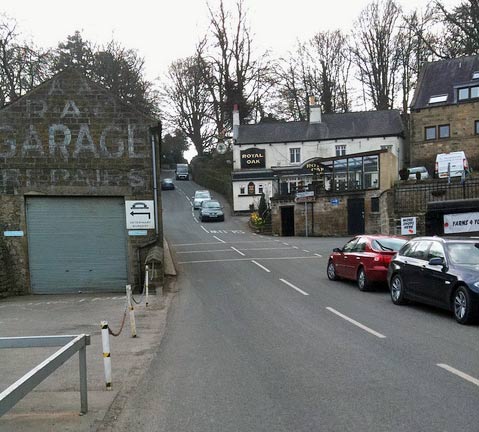 Stump Cross Caverns lie between Pateley Bridge and Grassington in Nidderdale. The limestone cave system at Stump Cross extends beyond the show caves which are open to the public to an overall length of approximately 4 miles.  Many of the deeper caverns are only accessible to experienced cavers.(see below)  In both areas there are numerous Stalactites and Stalagmites to inspire and damp corners to explore.

How the Caves Were Formed

The formation of Stump Cross Caverns began millions of years ago, when the area which is now the Yorkshire Dales was covered by oceans. Sediment from the ocean floor would eventually form limestone, the basic material from which the caves are made. The caves themselves began to form as the limestone was eroded by weak acid rain, created when carbon dioxide from the atmosphere mixed with the precipitation to form carbonic acid.
Many years ago, underground streams found their way into the cracks and began to expand the cave system as more rock was worn away. Once the streams had gone from the upper levels of the valley the cave system was left behind, and the mineral structures that are present today slowly began to form as water dripped through the caverns.

The caves at Stumps Cross were discovered in 1860 and have long been a visitors attraction. As I child I remember the’ butchers block’ a lump of stalagmite that was lit be a gruesome red glow. The impressive reindeer cavern was opened to the public in 2000 and development continues. The Stump Cross centre now includes a spacious tea rooms to cater for Patrons, who work up an appetite touring the caves, via a ‘Luxury Yorkshire Afternoon Tea’. Cave entry for the public is about £7 and more details and opening times are available here.

Caving as a Hobby

There is a list of Yorkshire Caving clubs and societies on the My Yorkshire web site. This may prove useful if you want to take up Potholing or caving as a retirement hobby but I think I will remain with my feet on the above ground. The Stalactite & Stalagmite formations have taken millennia to form and are very fragile so the British Caving Society produce guidelines on conservation access and protection.

I have no photographs as yet of the Stump cross formations so I have borrowed these American images from: Series: Ansel Adams Photographs of National Parks and Monuments, compiled 1941 – 1942, documenting the period ca. 1933 – 1942 Created By: Department of the Interior. National Park Service. Branch of Still and Motion Pictures. Photographer: Adams, Ansel, 1902-1984

This entry was posted in Our Yorkshire, Yorkshire Sport and Pastimes, Yorkshire Trips and Places and tagged locations, tea, Yorkshire Dales. Bookmark the permalink.