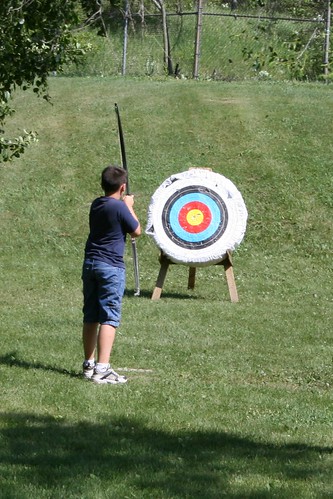 Archery with a silver arrow dates back to a contest in the sixteenth century.
Ever-since It has been an annual event in the North Yorkshire village of Scorton or other Yorkshire location. The original arrow is now on display at the Royal Armouries museum in Leeds.

The Society of Archers

The Society of Archers was formed at the first meeting of the  Silver Arrow Competition in 1673 for the
purpose of maintaining Target Archery. This skill  was largely in decline following the English Civil War.
The purpose of the Yorkshire Archery Association is to promote and support the sport of archery in Yorkshire.
The YAA is the county affiliation body for clubs in Yorkshire.
Archery Clubs in Yorkshire

This entry was posted in Yorkshire Sport and Pastimes and tagged sport. Bookmark the permalink.