On the road from Scarborough to Malton is Seamer, at the easterly end of the Vale of Pickering. It is here that pollen analysis and radio carbon dating have identified a site occupied circa 7,500 B.C. by Early Mesolithic Yorkshiremen.
The location is Star Carr immediately after the bridge over the River Hertford on what was the edge of prehistoric Lake Flixton .

Excavations At Star Carr: An Early Mesolithic Site at Seamer Near Scarborough, Yorkshire by J. G. D. Clark
‘Grahame Clark’s excavations at Star Carr from 1949 to 1951 have long been regarded as a model of how archaeological investigation should be conducted. In addition to this, the importance of the site itself has established for this report on the excavations a permanent place in all archaeological libraries’.

Where to see the ‘Finds’

About 17,000 worked flints and 300 cutting tools called burins were found when the site was excavated.
Some of the finds were housed at the Scarborough Museum.
Other finds have been donated to the British museum and the University Museum of Archaeology and Ethnology at Cambridge. 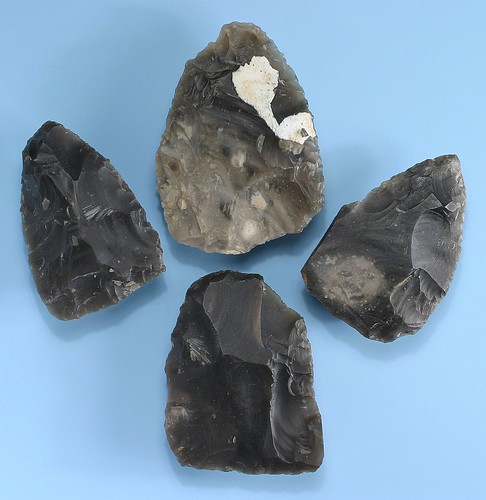 Modern Flints! Flint knives found in a group of tools and waste flakes in an Early Bronze Age grave circa 2000 B.C.

What do We Know About The Oldest Yorkshiremen

There is little to see other than featureless farmland as the site was buried 9 feet deep, about a foot for every thousand years! It is still worth visiting to picture the activities of our ancestors.
The seasonally occupied homes at Star Carr were used by families of hunter fisher folk.
It was a period of mildish winters and the bones of many animals included deer, ox, elk, hare, pine martins and beaver were excavated.
The hard working folk created many tools in addition to the numerous flints. They used antlers to make spear like weapons, bark for net floats, a birch wood paddle for fishing and iron pyrites flints to strike a light.
About 9,000 years ago industrious Yorkshiremen were leading the way and we are fortunate that the discoveries and pollen dating can help us understand so much about our predecessors.

This entry was posted in Our Yorkshire, Yorkshire History and Heritage and tagged archaeology. Bookmark the permalink.

One Response to Are The Oldest Yorkshiremen 10,000 Years Old?