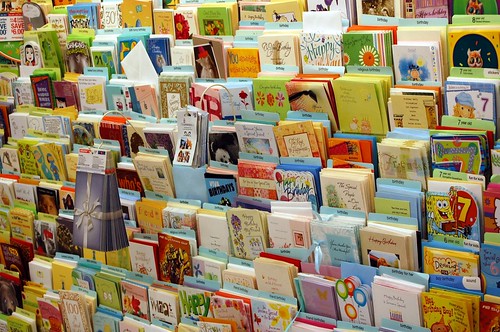 What is in the water in Yorkshire that makes us the center of the UK greeting card industry?

Unfortunately old companies like W.N. Sharpe’s of Bradford have been gobbled up long ago by American giant Hallmark but the operation still continues in Bradford and Castleford. ‘Hallmark founder Joyce Hall was born the youngest of 3 sons to the poor but religious Hall family in Nebraska. J.C.Hall was a hard worker and in 1910 he boarded a train to Kansas City as a young man with a vision – this is when the Hallmark story really began. Based at the YMCA, he started selling postcards via a mail order business, which developed to become the world leader in greeting cards. In 1958 Hallmark set up in Bradford and grew by a series of acquisitions.’ ‘Classic Cards, Bradford: The History of W.N. Sharpe Ltd’; is available as a pamphlet from the Bradford Historical and Antiquarian Society. Now a days Hallmark is seen on satellite TV with a host of programmes shown on it’s own channel.
This seasons Valentine’s Day cards are on display at Hallmark.

Down the road in Dewsbury Hallmark’s largest international competitor operates.
‘For more than 100 years, American Greetings Corporation has been a manufacturer and retailer of innovative social expression products that assist consumers in enhancing their relationships’. So runs the corporate blurb that can only come from an American company better known to us in the UK as the owner of Carlton Cards. They also own Care Bears and Holly Hobby on whose web site I have just enjoyed playing kids games

Today’s financial press reports that Wakefield based greeting card company Card Factory has been put up for sale but with the deal likely to go to a private equity firm this could mean more investment and the circa 4500 jobs should be safe. In addition to generating sales in excess of £150,000,000 the staff and company donated £1m to its corporate charity, Macmillan Cancer Support.

Collinsons have been established for over 100 years and now operate from Shipley in the West Riding. ‘ Focusing on Wedding stationery and Christmas cards, Collisons offers a wide choice to both the Wedding and the Christmas card market. Many of our Christmas cards are Charity based.’

History of Greeting Cards according to Wikipedia

The custom of sending greeting cards can be traced back to the ancient Chinese, who exchanged messages of good will to celebrate the New Year, and to the early Egyptians, who conveyed their greetings on papyrus scrolls. By the early 1400s, handmade paper greeting cards were being exchanged in Europe. The Germans are known to have printed New Year’s greetings from woodcuts as early as 1400, and handmade paper Valentines were being exchanged in various parts of Europe in the early to mid-1400s, with the oldest Valentine in existence being in the British Museum.[2]

By the 1850s, the greeting card had been transformed from a relatively expensive, handmade and hand-delivered gift to a popular and affordable means of personal communication, due largely to advances in printing and mechanization. read more

This entry was posted in Our Yorkshire, Yorkshire Business and Money. Bookmark the permalink.

One Response to Greetings Cards a Yorkshire Industry Making Millions