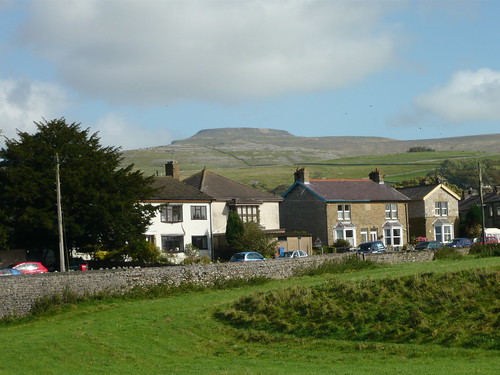 Ingleton is a lively place to visit for a weekend or short holiday. We chose the folk festival time when the fields were full of campers and the streets full of crows. There are some very good pubs in the heart of the village, plus the Marton Arms at Thornton in Lonsdale or the Old Hill Inn a couple of miles out on the road towards Ribblehead. From what I remember consuming they all serve good home cooked food and a sparkling selection of beers. All the pubs and a couple of clubs were full to overflowing when the singing started and harmonising is thirsty work.

The view from our guest house bedroom window on Main Street showed the most recognisable of the Three Peaks – Ingleborough. The back garden was at the confluence of the two fast flowing rivers the Twiss and the Doe where they become the river Greta. The rivers had already been inspected at closer quarters as we took the Waterfall Trail through Peca and Swilla Glens to Thornton Force and back via Beezley Falls and the aptly named Snow Falls.

Ingleton has a summer walking weekend at the end of May each year but every weekend should be a walking or caving weekend.
2009’s highlight event was probably Operation Home Guard a 1940’s memorial event with performances from the Ovaltiney’s, Gracie lands, a George Formby impersonator, Dancing with the Starlight swing Orchestra and 40’s disco. They take over the town centre, the street is closed to traffic, and is full of military personnel, civilians, cars, trucks and jeeps, from the war time period. Sunday military parade on 5th July 2009 with the NWW11 association 51st Highland division Black watch pipes and drums. Afternoon tea dance, military road run, military vehicles and classic cars, re-enactors, remote controlled battle tanks, trade stalls and spirited fun.

This entry was posted in Our Yorkshire, Villages, Towns and Cities, Yorkshire Arts & Music. Bookmark the permalink.

One Response to Drink Ingleton Dry