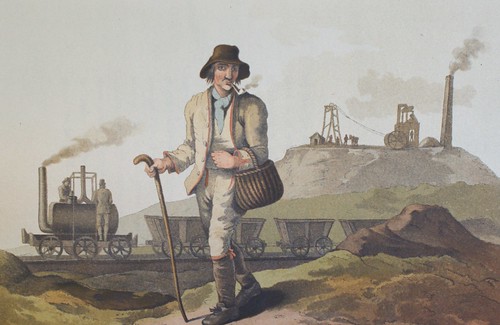 The Costume of Yorkshire in 1814, by George Walker,

‘One of these workmen is here represented as returning from his labours in his usual costume. This dress, which is of white cloth bound with red, may probably be ridiculed as quite inconsistent with his sable occupation; but when the necessity of a frequent washing is considered, surely none could have been adopted more conducive to cleanliness and health. The West Riding of Yorkshire, it is well known, abounds in coal, the consumption of which is prodigiously increased by the general use of steam engines. In the back ground of the annexed Plate is a delineation of the steam engine lately invented by Mr. Blenkinsop, agent at the colliery of Charles Brandling, Esquire, near Leeds, which conveys about twenty waggons loaded with coals from the pits to Leeds

If you are old enough to know what 50 shillings was in real money the you will also know the jingle John Collier, John Collier the window to watch. Established in Leeds when tailoring was a major manufacturing  industry the company was bought by United Drapery Stores (UDS) only to be asset stripped by Hanson plc. By 1985 it was owned by Burtons who closed the brand down and John Collier ceased to exist. Burtons was another Leeds based tailors from 1910 becoming the largest multiple tailors at a  huge complex in Leeds enterprisingly named  No. 1 factory and No. 2 factory.

Joseph left home to work in a Leeds mill from the age of 10. By the age of 30 he was in partnership and by 1890 they employed 2,000 staff and sold  stock via over 100 shops. Joseph Hepworth was a pioneer of the retail clothing store. Skip forward nearly a century and the Hepworth company bought Kendall stores to grow to over 600 shops. They recruited Terrance Conran, Hardie Amies and  George Davies who changed the groups name to Next and moved the HQ to Leicester.

In 1954 UDS acquired Alexandre Ltd  a Leeds-based multiple tailor owned by the Lyons families. Prices Tailors Ltd and Montague Burton were both Leeds companies that also succumbed to UDS.

Greenwoods company was founded in Bradford by Sir Willie Greenwood in 1860   and run largely as a family firm until 2008. At its peak in the 1990s there were around 200 mens clothing shops.

In 1871 James C Marshall and John Snelgrove were established in London as the family business of Marshall and Snelgrove. Branches were opened initially in Scarborough, Harrogate then Leeds, Bradford, York, and Sheffield before Debenhams took over and re-branded the remaining stores.

Bradford was alos the original home of a small chain of quality stores Brown Muff & Co. The company became part of the House of Fraser in 1977and is  still operating in Skipton. 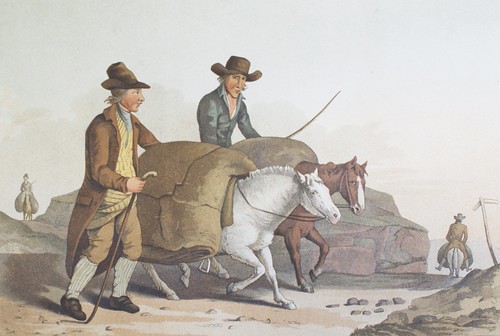 The Costume of Yorkshire in 1814, by George Walker, plate 2: The Cloth-Makers

‘The manufacture of cloth affords employment to the major part of the lower class of people in the north-west districts of the West Riding of Yorkshire. These cloth-makers reside almost entirely in the villages, and bring their cloth on market-days for sale in the great halls erected for that purpose at Leeds and Huddersfield. These men have a decided provincial character; and their galloways also, which are always overloaded, have a manner of going peculiarly of their own.

The various people employed in the cloth trade will furnish materials for several Plates in the course of this work. It is therefore unnecessary to enlarge upon the subject under this or any other particular head.’

If clothes maketh man then Yorkshire maketh the cloth and the clothes.

This entry was posted in Our Yorkshire, Yorkshire Business and Money. Bookmark the permalink.