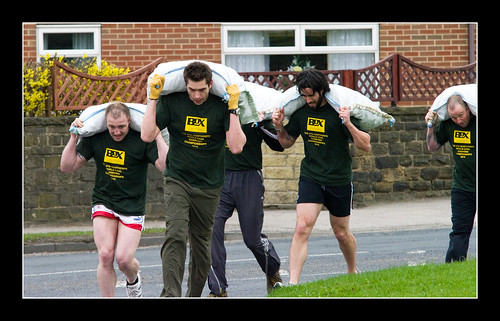 According to the organisers this is how the World Championship came about ‘Reggie Sedgewick and one Amos Clapham, a local coal merchant and current president of the Maypole Committee were enjoying some well-earned liquid refreshment whilst stood at the bar lost in their own thoughts. When in bursts one Lewis Hartley in a somewhat exuberant mood. On seeing the other two he said to Reggie, ” Ba gum lad tha’ looks buggered !” slapping Reggie heartily on the back. Whether because of the force of the blow or because of the words that accompanied it, Reggie was just a little put out.‘’ Ah’m as fit as thee’’ he told Lewis, ‘’an’ if tha’ dun’t believe me gerra a bagga coil on thi back an ‘ah’ll get one on mine an ‘ah’ll race thee to t’ top o’ t’ wood !’’ ( Coil, let me explain is Yorkshire speak for coal ). While Lewis digested the implications of this challenge a Mr. Fred Hirst, Secretary of the Gawthorpe Maypole Committee ( and not a man to let a good idea go to waste) raised a cautioning hand. ” ‘Owd on a minute,’’ said Fred and there was something in his voice that made them all listen. ‘Aven’t we been looking fer some’at to do on Easter Monday? If we’re gonna ‘ave a race let’s ‘ave it then. Let’s ‘ave a coil race from Barracks t’ Maypole.’

2009 was the 46th World Coal Carrying Championship and the BBC claim these facts about world champions
1. Window cleaners, builders and farmers are the most successful at winning the title
2. The best weight for an entrant to be is 10st 7lb
3. Competitors need to have strong legs and lungs

The sponsors are H.B.Clark independent brewers of Wakefield so a fourth fact  would be an appetite for beer. 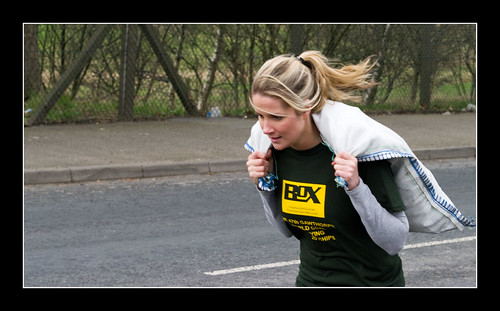 Gawthorpe is between Dewsbury and Osset and also has a good May Day tradition. with dancing on the FIRST SATURDAY IN MAY EVERY YEAR. Gawthorpe itself can be dated back to the Romans and is believed to be named after a Viking Chief called “Gorky “. At the lower end of the village is an earth mound known as Fairy Hill. This is thought to be a Viking burial mound.

Maypole dancing itself dates back as far as Richard II in England, and during the reign of Henry VIII reached most of the rural villages including Gawthorpe. Mayday itself became a public holiday until Oliver Cromwell (1649 – 1660) banned May Merrymaking and all such festivities. These were fortunately re-established by Charles II.

This entry was posted in Yorkshire Sport and Pastimes, Yorkshire Trips and Places and tagged beer, events, nostalgia, sport. Bookmark the permalink.

One Response to World Coal Carrying Championship at Gawthorpe Again