Celebrate all that was great about British All in Wrestling. ‘Nine and a Half Psychedelic Meditations on British Wrestling of the 1970s and early ’80s’ by Luke Haines is an affectionate homage to the old wrestlers profiled below.
The free 1978 calender includes pictures of Klondyke Kate, Adrian Street, Marc ‘Rollerball’ Rocco and Catweazle as well as all your star favourites. (Sorry it included Dickie Davis instead of Kent Walton.)
Top Yorkshire attractions, Big Daddy and ‘orrible Bradfordian Les Kellett feature in ‘Big Daddy Got a Casio VL Tone’ but musically I go for ‘I am Catweazle’ and ‘Haystacks’ in Heaven’.
Still you already know my ‘dubious’ tastes in music.

Credits
Thanks for the photograph and Walton like commentary repeated below ‘TV Shows We Used To Watch – 1970s – Wrestling by brizzle born and bred’ CC BY-NC 2.0
“Turn back the clock to the 1970’s when Saturday afternoon meant one thing and that was Wrestling.

Wrestling – a mainstay of the World of Sport schedule from 1955 until it ended. Many of the wrestlers featured became household names in the UK and the greatest rivalry was between Big Daddy and Giant Haystacks

Tag team action was from the man in the big black pants (and hair to match) Mick McManus and Steve Logan versus Kendo and Gorgeous George and the late Pat Roach who went onto star in 4 series of TV’s Auf Weidersehen Pet and Leon Arris (the great late actor Brian Glover) plus Jackie Pallo the pony tailed hero the girls loved to hate.

Kent Walton, the former wrestling commentator on World of Sport who died aged 86, was instantly recognisable from his husky welcome at 4 o’clock each Saturday afternoon: “Greetings, grapple fans.”

A smoker who cultivated a mid-Atlantic drawl, Walton hosted the wrestling for all of the 33 years that it appeared, sandwiched between the half-time and full-time football scores; at the end of the allotted time, he would sign off: “Have a good week. . .till next week.” When the ITV schedulers finally dropped the sport in 1988, he announced that his lips had been dented by so much time at the microphone.

Walton’s understated, factual commentary described wrestlers from George Kidd (his favourite), Jackie Pallo and Mick McManus to the less athletic Big Daddy (“Ea-sy, ea-sy”) and Giant Haystacks. Walton hotly refuted allegations that the bouts were fixed, and would put into practice on saloon-bar doubters some of the wrestling moves he had learned. In its televised heyday, wrestling attracted as many as 12 million viewers. They included the Queen, whose interest in the sport was mentioned in Richard Crossman’s diaries; and Margaret Thatcher, who asked Big Daddy for six signed photographs, and found him useful for conversation in Africa, where he was a household name. The Duke of Edinburgh was said to be captivated by Johnny Kwango’s head-butting technique, and Frank Sinatra told Giant Haystacks that British wrestlers were the best entertainers in the world. 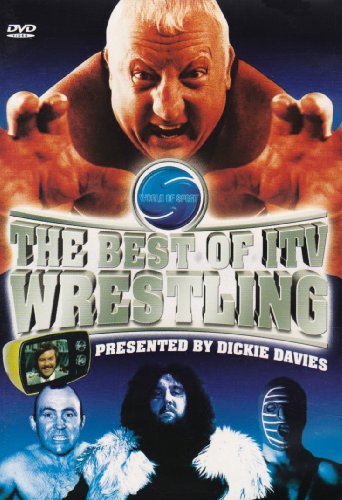 Shirley Crabtree, Jr, better known as Big Daddy (14 November 1930 – 2 December 1997) was a British professional wrestler famous for his record-breaking 64 inch chest. Known for wearing his various Big Daddy leotards, Crabtree’s original one was emblazoned with just a large “D” and was fashioned by his wife Eunice from their chintz sofa.

Shirley Crabtree’s brother Brian was a wrestling referee and his nephew Eorl Crabtree is an England international rugby league footballer.

Crabtree died of a stroke in December 1997 in Halifax General Hospital. He was survived by his second wife of 31 years, Eunice and six children.

Martin Ruane (October 10, 1946 – November 29, 1998) was an English professional wrestler of Irish descent. Best known by his ring name, Giant Haystacks, he wrestled in such places as England, the United States, Canada, India, and Zimbabwe. Ruane was known for his massive physical size, standing 6 ft 11 in (2.11 m) tall and weighing 48 stone (670 lb; 300 kg) at his heaviest.

Martin Ruane was born in London, England to parents originally from County Mayo in Ireland. When he was 3, in 1949, Ruane and his family moved north from London to Salford, which remained his home. He worked as a labourer and as a nightclub bouncer before a friend suggested he take up professional wrestling as a career. He died of cancer on Sunday, November 29, 1998 at the age of 52.

Kendo Nagasaki is a professional wrestling stage name, used as a gimmick of that of a Japanese Samurai warrior with a mysterious past and even supernatural powers of hypnosis. The name derives from the modern martial art of Japanese fencing (Kendo), and Nagasaki is the name of a city on the south-western coast of Kyūshū, site of the second use of the atomic bomb.

The original and most well known use of the gimmick is by the legendary British wrestler Kendo Nagasaki who made his name in ITV’s World of Sport. This version of the Nagasaki character dates back to November 1964.[

A true enigma of the British wrestling scene, the man known as Kendo Nagasaki was a part of the industry for nearly 40 years and, in that time, cultivated a legend that endures to this day. Hidden behind a red mask lined with white stripes to simulate the imposing visage of the headgear worn in a formal kendo match and maintaining a stony silence, Kendo Nagasaki was an intimidating sight to behold both in and out of the ring. This combined with a genuine understanding of the theatrical aspect of professional wrestling and a certain degree of athleticism made him an effective performer and a superb villain.

Mick McManus (born Michael Matthews on 11 January 1928 in New Cross, London England), is a former English professional wrestler. He is credited as being one of the most famous heel European wrestlers of all time and often went by the nicknames “The Man You Love to Hate”, and “Rugged South London Tough Guy”.

McManus very much set the standard for wrestlers such as Mark Rocco and Kendo Nagasaki who chose to bend the rules as far as they could go without being disqualified, much to the fury of the crowd. He was also well known for using short range forearm jabs in matches. He became famous for his trademark black trunks and cropped black hair and for his catchphrase “Not the ears, not the ears”.

McManus had many appearances on ITV’s World of Sport. During his televised matches, which spanned more than 20 years, McManus would lose only twice in a Championship match: once by disqualification against Peter Preston, and then again in his final years when he lost his title to youngster Mal Sanders (at which time McManus was well over 50-years-old).

One infamous televised match he lost was to the controversial parody wrestler “Catweazle” (Gary Cooper), due to two submissions caused by the latter tickling him whilst pinned. Such was McManus’s fury at the manner he lost that he refused to wrestle Cooper again, but agreed to relent for his final televised bout.

Yorkshireman Les Kellet was born in Bradford in 1915. After completing an engineering apprenticeship and travelling the world as a merchant seaman Les returned to Bradford following the Second World war and established himself as one of the most successful and popular British wrestlers of all time. His wrestling trainer, Len Pickard, and promoter George de Relwyskow Snr., are the two men credited with cajoling the reluctant Kellet to follow a professional career

Pat Roach was born in Birmingham in 1937 and by the age of 22 had gained a black belt in Judo. From this impressive achievement the 6’5 tall near 20 stone giant went into the rings of Great Britain becoming an instant hit due to his size and skill. Even though Pat was one of the largest athletes in the ring he was able to match holds with some of the smaller and more technical men of the era, this combined with his immense size made him a devastating opponent for anyone.

Mike Marino was one of the most beloved Professional Wrestlers to ever to put on a pair of wrestling boots, he was loved in equal measure by both the fans and the wrestlers alike.”