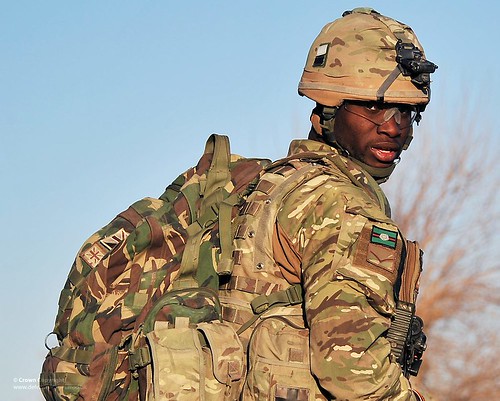 Soldier with 1st Battalion the Yorkshire Regiment on Patrol in Afghanistan

‘A soldier with 1st Battalion the Yorkshire Regiment is pictured on patrol in the Nahr-e Seraj district of Helmand, Afghanistan.

B Coy (Company) 1st Battalion the Yorkshire Regiment (1 Yorks) based at PB(Patrol Base) Rahim in Nahr-e Seraj North (NES North) District occupy PB Rahim itself and 3 small Check Points(CP) dotted around the Area of Operations (AO). B Company’s job is to ensure the security of the local population by conducting foot/vehicle patrols and Operations. B Coy’s works closely with the ANSF (Afghan Security Forces) particularly the ALP (Afghan Local Police) who are locally based’.

The Band of The Yorkshire Regiment is less than 4 years old and is one of the newest of the nineteen Territorial Army bands. The band is keen to recruit musicians looking to perform in a spare time basis without the full commitment of the Regular Army.

The Band performs in a variety of military and public events across our Regimental footprint area of Yorkshire and the North East of England. These include include dinner nights, marching displays, concerts, ensembles and other forms of groups. The Band recently visited Germany where it undertook this year’s fortnight training camp.

The Music of The Yorkshire Regiment

.
As you may expect of The Yorkshire Regiment it has a large number of musical pieces associated with the county and the regiment’s long history.

Credit to the Regimental band web page for their oeuvre but I hope they do not play as many wrong notes as they make spelling mistakes when they even get Ilkley wrong!
I would call it a Yorkshire sin but then I realise who I might be criticising and back off – Well done lads!

This entry was posted in Yorkshire History and Heritage and tagged military. Bookmark the permalink.