The East Riding or Wolds Waggon

Leeds Art Gallery has been closed for far too long. Amongst the unviewable treasures are the historic plates by George Walker depicting working costumes and regional garb from the Ridings. They are however available in Flickr 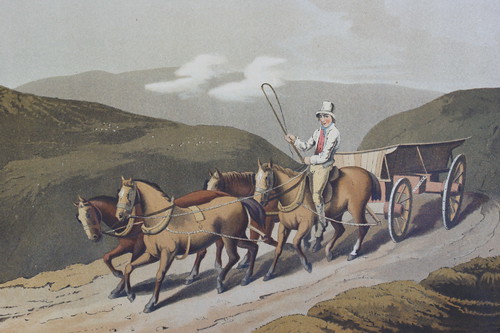 The East Riding or Wolds Waggon

‘The account given of this carriage by H. Strickland, Esq., in his late excellent publication on the agriculature of the East Riding of Yorkshire, is so perfectly descriptive of the annexed Plate, that we here take the liberty of quoting it verbatim.

“Little can be said in favour of the waggons which are in general use here; they are high, narrow, and long; an inconvenient form for the purposes for which they are intended, that of carrying a top-load, particularly in such parts of the country as are irregular; and they have but one peculiarity in their construction which seems worthy of more general adoption. This is a strong chain on each side of the waggon, of which one end is fixed to the back of the fore axletree, and the other to the other side of the body, of such a length as just to prevent the opposite wheel from locking against the side of the waggon in turning; by which means the body may be set much lower between the wheels, without being weakened by cutting the side to admit the wheel (as is sometimes done), and the waggon may be turned within a much smaller space. The mode of yoking appears to be a practice nearly peculiar to that district, and is deserving of imitation. The four horses are yoked two abreast, in the same manner as they are put to a coach, two drawing the splinter-bar, and two by the pole; those at the wheel also drawing by a swinging bar; which the wheel-horses of every carriage ought to do, as they thereby obtain considerable ease in their draft, and are less liable to be galled by the collar than those which draw by a fixed bar. The driver then being mounted on the near-side wheel-horse, directs the two leaders by a rein fixed to the outside of each of their bridles, they being coupled together by a strap passing from the inside of each of their bridles to the collar of the other horse. In this manner, when empty, they trot along the roads with ease and expedition; and when loaded, the horses being near their work, and conveniently placed for drawing, labour with much greater ease and effect than when placed at length. Were the waggons, indeed, of a better construction, the team would be excellent.” ‘ 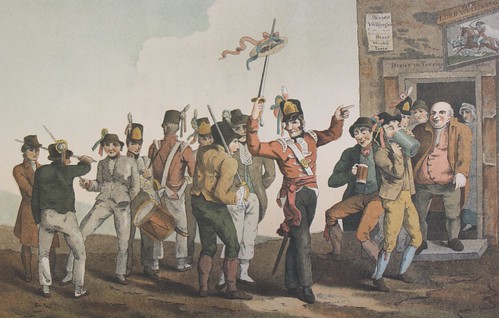 ‘This Regiment was raised during the American War, in the neighbourhood of Halifax, from which circumstance, and that of their recruiting-serjeants always preceding the party with an oat-cake upon their swords, the men have always been denominated the Haver-cake Lads. Till very lately the gallant Lord Wellington was the colonel of this regiment. To his portrait the eloquent serjeant in the Plate is appealing, which, with the strong additional aid of Sir John Barleycorn, will no doubt produce a powerful reinforcement to the Haver-cake Lads. The regiment has been lately given to Sir John Sherbrooke.’ 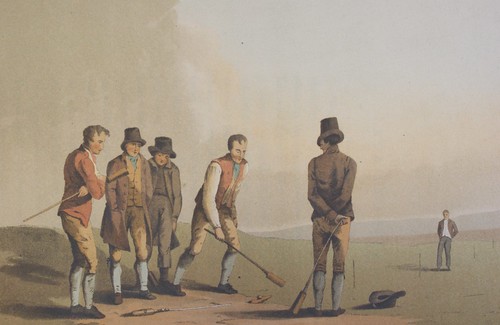 ‘This is no doubt the same game, a little varied, which Strutt, in his Sports and Pastimes of England, denominates Northern, or Northern Spell. The little wooden ball is in Yorkshire called the Nor, and the receptacle in which is placed, the Spell. A sight of the Plate will sufficiently explain the anture of the game, which is necessarily played on an open piece of ground. Upright sticks or stones, placed at certain equal intervals of about twenty yards serve to regulate the score by determing the distance to which the ball is struck. The player uses a long stick of cane or hazle, to the end of which is fixed a thick solid piece of wood. With this instrument he raises the ball by tipping the sharp end of the spell, and strikes it while it is still in the air. Strutt describes the spell as hung upon a pivot considerably above the ground, the ball as made of leather, and much larger, and the stick as resembling in form the bat used for cricket. In short it approaches more nearly to the modern game of Trap-ball, and by no means admits of the skill requiredd in the one here represented.’