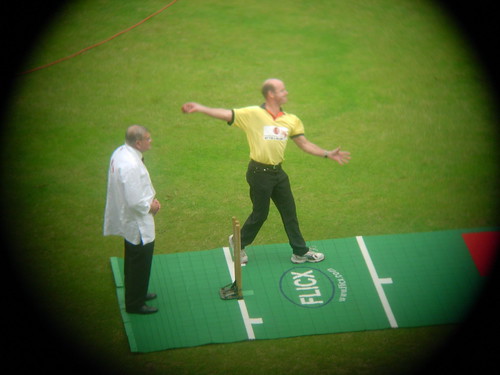 Harold Dennis (Dickie) Bird, was born at Church Lane Barnsley 19 April 1933. (Simon Hughes in the photo wasn’t born in Barnsley) so no ball him
In the 2012 New Years Honours list Dickie was  awarded the OBE.
The award could so easily have been the OBU or Old Blind Umpire but well done Dickie. Other sporting awards for Yorkshire folk go to Jamie Peacock from Leeds Rhinos and Taekwondo champion Sarah Stevenson from Doncaster.

1970 Stood in his first county game

2007 Dickie came out of retirement in January 2007 to umpire the XXXX Gold Beach Cricket Tri-Nations series involving cricket legends from England, the West Indies, and Australia, which took place at Scarborough beach in Perth, Australia .

The Best of Dickie Bird on audio CD from Amazon