Batley Bashed by Tesco and Dewsbury 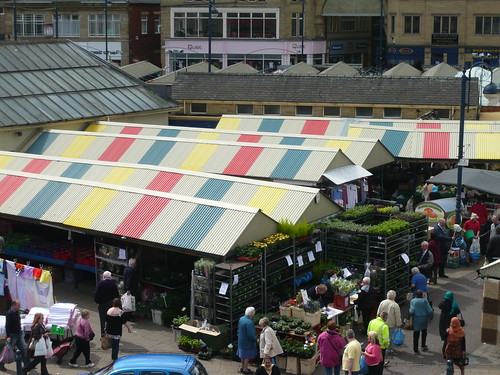 Seldom have I seen a town so run down as Batley on a Saturday in January.
First the good news there was easy parking near the traffic lights and a good value pub lunch at Wetherspoon’s The Union Rooms. Then we set out to find the local market to buy fruit and veg for the weekend and some marmalade making.

Several ‘pound shops’ competed for trade from the people dodging the showers and despite being friendly they must have been finding it hard to make a living.
Decorating and iron mongers were well represented and things were looking up as we walked down Commercial Street but the optimism was short lived as there seemed to be a poor variety of viable retailers.
After asking passers by for the location of the market we discovered that it was not functioning. It may be closed on a Saturday in favour of the near-by Dewsbury market or be a ‘market of the past’. One local said ‘there are no greengrocers in the town and I bet you don’t want the Tesco stuff’ and he was right.
With nowhere else we stopped in the dreaded Tesco Extra store. What a monster, full of shoppers spend thriftly ring the tills for Tesco and the death knell of local traders. I think we were the only people to leave with an empty basket, (they has no Seville oranges.)

On the Plus Side

Beware there may be a Tesco Extra being planned in an area near you. Just think what it can do to retail in the surrounding area. Big isn’t always beautiful.

This entry was posted in Yorkshire Business and Money, Yorkshire History and Heritage. Bookmark the permalink.