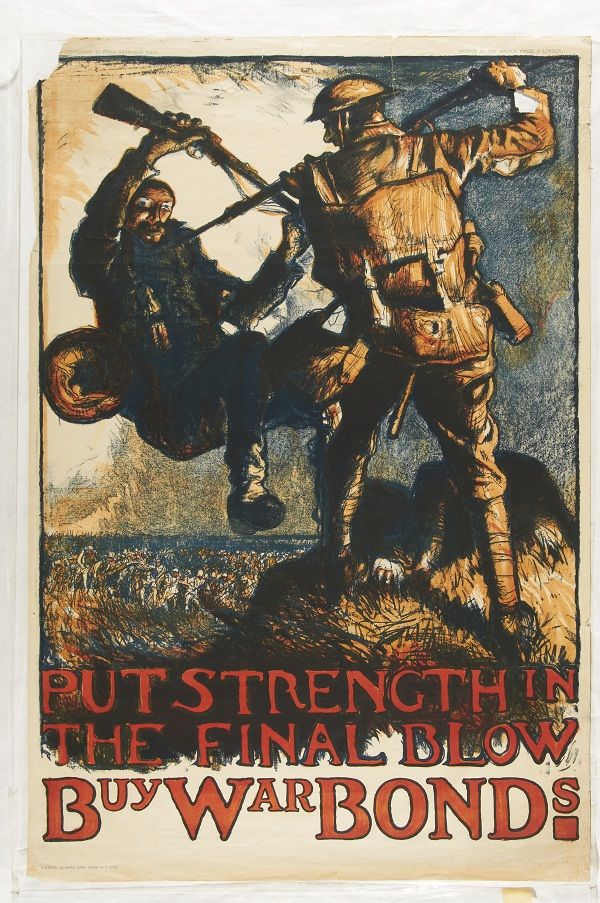 Among his significant body of work are many items  in the Scarborough art collection.

Commissioned to produce  posters to support the War Bonds Campaign Brangwyn created many poster designs during the first World War. Many were given free of charge to charitable groups such as the Red Cross, National Institute for the Blind  St Dunstan’s Hostel for Blinded Soldiers and Sailors , Belgian and Allied Aid Leagues and others. In 1918 his poster above ‘War Bonds 1’ was issued by the National War Savings Committee, and described  as ‘one of the most vicious posters that the war produced’ it was toned down slightly with’ War Bonds 2′  using landscape proportions and different expressions.

Dr Elizabeth Horner, the leading authority on his work, curated an exhibition of posters from the Harrogate Mercer Art Gallery collection in 2014 which led to the production of a well illustrated book ‘Brangwyn’s War – Posters of the First World War.’
Brangwyn borrowed uniforms of British and German soldiers from the Imperial War Museum to ensure accuracy.