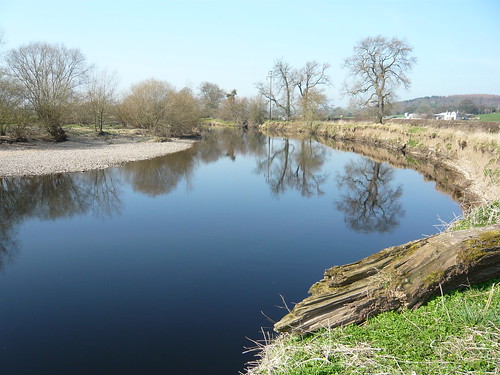 Crossing the Lower Wharfe since the doomsday book times in 1086 has been no mean feat despite fords at Knots Ford and probably Pool where the bridge now stands. Pool bridge was built in 1793 and widened in 1815 and it seems there have been road works there ever since. The volume of water after rain in the dales is massive and has led to flooding many times in near by Castley. Over the years the volume of water must be staggering. This water has been the core of industry at Pool in Wharfedale since the reformation. The original wool mill dated 1673 was swept away with Pool Low Fulling Mill and two bridges. Paper mills (that use lots of water) were built in the 18th century and this trade has been carried on by the Whiteley family and others ever since. A Flour mill was also operated along side the river but the village was located 200 yards away for fear of flooding.

Arthington
A mile to the east of Pool in Wharfedale on the south side of Wharfedale lies Arthington where records of the Priory go back to 1271 and the then prioress, Sara. Other Cluniac nuns in charge included Maud de Kesewik died 1299, Agnes de Pontefract 1302, Isabella de Berghby 1311 (demoted after leaving from the priory without permission), Sibil Plesyngton 1437, Marjorie Craven 1463, Alice Hall 1496 and Elizabeth Hall 1532. The Priory was surrendered in 1540 to Thomas Cranmer. more history
Staircase Lane running from Bramhope through Arthington to Pool is the place of a ghost story based on a wager with a member of the Dyneley family. Whilst galloping his horse down the staircase he was thrown and killed. The ghostly hooves can still be heard today!

Pool
The roads of Old Pool Bank and Pool Bank up to the Dyneley Arms have been the cause of many over-heated car engines and traffic jams as vehicles climbed out of the valley up to Yeadon Airport. These are the main roads between Bradford and Harrogate with other Wharfe crossings at Otley and Harewood. In the village near St Wilfrids church there was a blacksmith and wooden stocks whilst in Arthington there were kilns and forges. There are a couple of pubs, an active village hall and local cricket and football teams.

One of the big annual events approaching Christmas time is the visit of Santa Clause helped by gnomes from Otley Lions on the sleigh.

This entry was posted in Villages, Towns and Cities, Yorkshire Dales. Bookmark the permalink.

2 Responses to Pool in Wharfedale & Arthington