Wilfred Pickles Have a Go 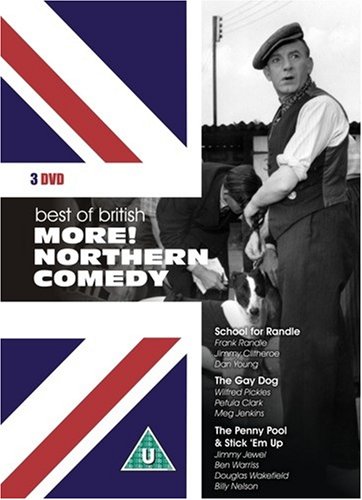 You can get snippets of Wilfred Pickles as an actor on youtube or watch a full comedy series with Jimmy Jewel from Barnsley on this boxed DVD of More Northern Comedy.

According to wikipedia Wilfred Pickles was a proud Yorkshireman, (aren’t we all) ‘born in Halifax and having been selected by the BBC as an announcer for its North Region radio service, went on to be an occasional newsreader on the National service during World War II. He was the first newsreader to speak in a regional accent rather than the “BBC English” of the period, and caused some comment with his farewell catchphrase “… and to all in the North, good neet”.’

One of his books ‘The Wifred Pickles Gay Street Book’ with Enid Blyton and the Biggles author Captain W.E. Johns, et al. wouldn’t pass the politically correct brigade in current publishing. In the early post war years Wilfred Pickles was as close to a modern day Celebrity as you could get. Wireless was a great medium for developing catch phrases and Wilfred had his fair share including “Give him the money, Mabel”, “How do, How are yer?”, “Give ’em the money, Barney!” (Barney Colehan) and “Are yer courting?”

The title song to his radio show ‘Have a Go’ will be remembered by the many who attended or listened to the show over it’s 21 years. They never visited the same place twice and had over 1500 outstanding invitations to visit when the show finished.

You can’t lose owt, it costs you nowt

To make yourself some dough.

So hurry up and join us, don’t be shy

and don’t be slow.

Theme and words by Jack Jordan

Mabel, Wilfred’s wife took over ‘at the table’ and Violet Carson (Ena Sharples of Coronation Street) played the piano. The original prize money was 1 pound 18/6, awarded in increments of 2/6, 5/-, 10/- and 1 guinea.

The autobiography of Mabel Pickles by Mabel Myerscough Pickles is still available in some book shops.

This entry was posted in Wit and Humour, Yorkshire Arts & Music, Yorkshire Folk. Bookmark the permalink.

One Response to Wilfred Pickles Have a Go