Tea Rooms to Visit on the Yorkshire Tea Council Trail 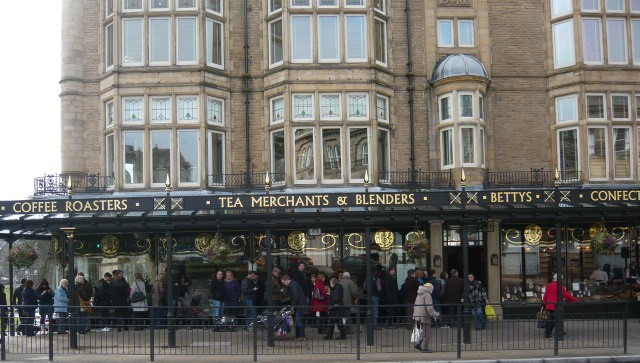 In 1919 Frederick Belmont opened his first Bettys Café Tea Rooms in the fashionable spa town of Harrogate. It seems like I was queuing from that date as the people snaked around the corner last weekend. There are six Bettys Café Tea Rooms to explore: the spa town of Harrogate has two branches one in the town centre and a second at the RHS garden at Harlow Carr. York has one in the square opposite St Helen’s and Little Bettys is just around the corner in Stonegate. You can also also find Bettys in the market towns of Northallerton and Ilkley.

The above logo from the Tea Guild has an Afternoon tea group that may interest those who like to pause in welcoming surroundings with a good cup of tea and a bite to eat. The Yorkshire locations include:

Other Tea Council locations include Elizabeth Botham & Sons, plus Bullivant both of York and The Black Swan Hotel, Market Place, Helmsley. The Bridge Tea Rooms in Bradford-on-Avon, Wiltshire has been named as the winner of The Tea Guild’s prestigious Top Tea Place 2009 Award but that is not the Bradford Yorkshire where I have still to discover a true tea room but see Shipley’s earlier story.

The UK Tea Council’s “incognito” Tea Guild inspectors have taken tea in tearooms and country and city hotels across Britain, to find the finest tea experience. The anonymous judges award points in fifteen different categories which include the variety and excellence of the teas offered, efficiency and knowledge of service, décor, hygiene and cleanliness, ambience, presentation skills and most importantly the choice and quality of teas served. That seems like a fine job to have I wonder how much you have to pay them to go eating and drinking Teas?

Just a note on the Tockwith Tea Party where Betty’s of Fat Rascal fame sought to stop Fat Betty’s Cheese Nibbles from being made and sold. I understand the Cheese nibbles won but crumbs what a fuss.

This entry was posted in Food and Drink & Yorkshire Products, Our Yorkshire, Yorkshire Trips and Places and tagged dayout, tea. Bookmark the permalink.