Farndale, aka ‘Daffodil Valley’ by virtue of the ‘Lenten Lilies’ which carpet the valley floor in a sea of yellow each spring. The Daffodils, Narcissus pseudonarcissus, were probably brought to the valley and Douthwaitedale by 12th century Monks and got the old name Lenten Lily from the fact they normally bloom around Easter, a little later than most British Daffodils. If you are not worried by crowds then a weekend trip at the end of March or April will repay your perseverance. Because of the cold weather this year you may find a warmer and quieter time to visit will be mid-week mid-to late April.

Walking The Dove and Farndale

If you are not on your bike ‘Walking world’ has a range of interesting walks including Church houses in Farndale on this site. Wikipedia’s entry for Farndale must have been written by a southerner who dislikes moorland as ‘Farndale is surrounded by some of the most inhospitable moorland in England, and is sandwiched between Bransdale and Rosedale. …… Around the north of Farndale, is the track bed of the old Rosedale Ironstone Railway which forms part of two Long Distance Footpaths these being Wainwright’s Coast to Coast Walk and The Lyke Wake Walk’. Well they are right about walking so forgive and forget. There are many fine walks along the banks of the river Dove starting at the small hamlet of Low Mill where a nearby field is used to accommodate the hundreds of cars which arrive during the daffodil season. 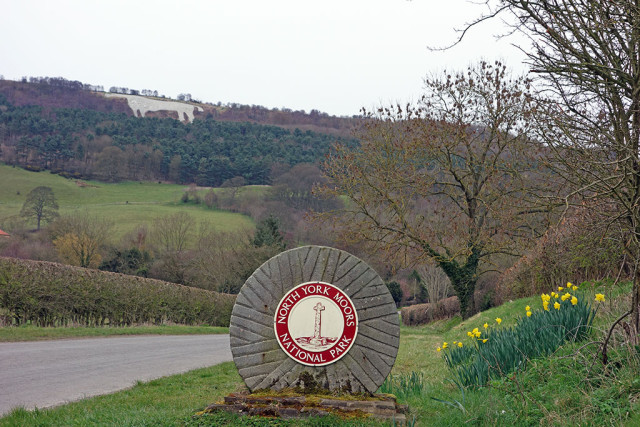 Refreshments are available at the Daffy Caffy at High Mill and the Feversham Arms Inn at Church Houses. The “Daffy Caffy” cafe tearoom is situated on the well known daffodil walk in beautiful Farndale, North Yorkshire, England. The scenery and walking is quite magnificent, whether it be along the river or climbing up to Rudland Rigg on the North York Moors. In the hamlet of Church Houses, Farndale, the Feversham Arms ‘serves good food and beer for the passing walker’. Just up the road is St Mary’s Church a small moors village church built in 1831 and well worth a visit even when the Daffodils have gone.

Alt country bands, renown folk singers and even Yorkshire Countrywomens Associations use the Band Room in Farndale variously described as ‘England’s tiniest major venue,’ ‘The greatest small venue on Earth,’ and ‘a corrugated iron shed in the middle of nowhere.’ There is a big gig no 29th August 2010 the night before the 103rd Farndale Show staring Megafaun ( I will say that a bit louder). Built for the Farndale Silver Band in the 1920s this 100-capacity wooden building adds atmosphere to most performances if you can get a ticket.
Picking Daffodils is not an activity that can be pursued as Farndale is now a protected Nature Reserve. Leave the flowers for others to see and the seeds to reproduce naturally.

One Response to On Yer Bike to Farndale Daffodil Valley